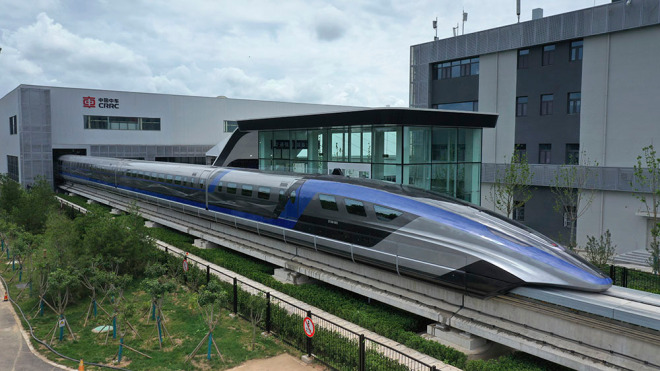 China has outdone itself with the debut of a train faster than the Shanghai Maglev, which once held the top spot for fastest train in the world as it reaches speeds of up to 430 kph. The new maglev bullet train boasts a top speed of 600 kph and made its debut in Qingdao last month.

The prototype was revealed in 2019 when China announced lofty plans to achieve 3-hour transport between key metropolitan areas. The new maglev train will be able to transport passengers between Shanghai and Beijing in just two and a half hours, compared to 5 and a half hours by the conventional high-speed rail for a journey that spans over 1,200 kilometres.

Maglev stands for “magnetic levitation” which means the train levitates above the tracks and there is no contact between track and train. No, not magic but science! In the simplest terms, magnetic repulsion is used to levitate the train, and a combination of magnetic repulsion and attraction moves the train forward.

This Could Be How We Get Around In the Future.

The new China maglev can travel with up to 10 carriages, each with a 100 pax capacity and that means 1,000 passengers in total. Besides its record-breaking speed, the train also creates very little noise and is easier to maintain compared to other high-speed trains, that is according to Liang Jianying, the Chief Engineer of state-owned China Railway Rolling Stock Corporation, which developed the train.

However, China might not be holding the record for fastest land speed transport for long. In the US of A, tests are underway to create a vacuum tube transport called the Hyperloop, pursued by several parties including the likes of Elon Musk and Richard Branson, and could potentially whisk you from one place to another at speeds of over 700 kph. The race is on!

3 Automotive-Related Buttons That We Must All Know About