The newly dropped F9 trailer opens with a black Dodge Challenger SRT cruising down a lonely highway and as you expect it to cut scene to some car chase scene with major crashes, big booms and loud bangs, it glides into an introduction by Vin Diesel, the actor as himself. As it is starting to look like a car ad, Vin Diesel acknowledges the challenging year that passed and reminisces about…going to the movies.

F9 was supposed to hit theatres about a year ago but its release was delayed due to lockdown measures and movie theatres shutting down worldwide.

Morgan Freeman he is not, but Vin Diesel delivers a most heartfelt ode to movie-watching in anticipation of movie theatres (or as the rest of the world calls it, cinemas) reopening gradually across the USA. Then it fades to black, dramatic pause, cuts to a fast-paced sequence of Vin Diesel’s character, Dom Toretto, and Michelle Rodriguez’s, Letty, being chased by trucks and helicopters towards a cliff. Of course, Dom floors it. And of course, they do not die. Miraculously an old bridge cable snags on their car and swings them around to another side of the cliff…no one said Fast & Furious was true to reality.

Each character and their main machine.

The ninth installment of the Fast & Furious franchise will see Dom and the crew take on the most formidable antagonist yet, Dom’s brother, played by former wrestler, John Cena. It is slated for a 25th June 2021 release, and an earlier 19th May release in Taiwan, Hong Kong and South Korea.

Promotional posters released last year hinted at the metal stars that will appear in F9, including a Dodge Charger 500 for Dom, a Yamaha YZ450F for Letty, and a Ford Mustang GT350 as the vehicle of choice for Cena’s character. Fan favourite Han makes a surprise return (guess he didn’t die in that explosion…) in an orange 2020 Toyota Supra. 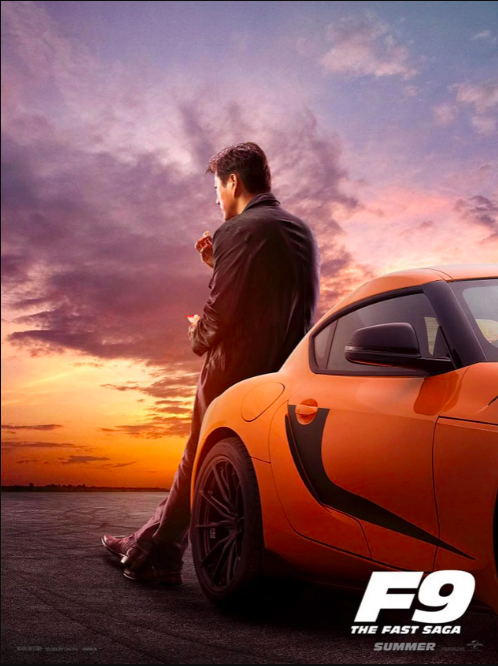