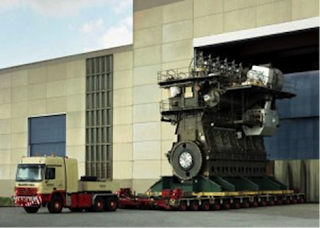 Let’s face it – no other words describes the Wartsila – Flex96C, an engine soooo big that the manufacturers had to install walkways upon it!

The engine is a two stroke turbocharged low-speed diesel engine designed by the Finnish manufacturer, Wartsila, and is officially the world’s largest reciprocating engine in the world. But don’t worry, it is not coming to any street near you anytime soon. The engine is specifically designed for use in large container ships running on heavy fuel oil. 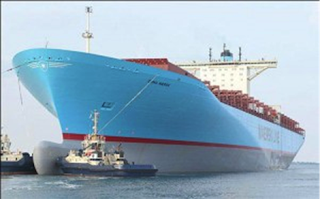 Now hear this! The engine is thirteen and a half metres high, twenty seven point three metres long, weighs in at over 2300 tonnes with the crank shaft alone weighing in at three tonnes and delivers a staggering 109000 horse power. The engine is designed for use in some of the world’s largest container ships such as the Emma Maersk which was the first ship to be commissioned with the 14 cylinder behemoth. This ship is designed to carry up to 11000 twenty foot containers at a speed of up to 31 knots (others travel at about 20 knots) between China and USA. 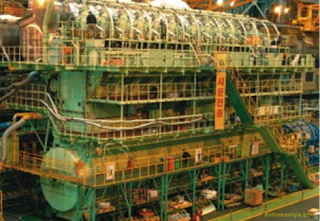 The engine utilises revolutionary common rail technology that does away with the traditional cam-shaft, chain gear, fuel pumps and hydraulic actuators. The results are better performance at low RPM, lower fuel consumption and lower emissions. In fact, the engine operates at 50 percent thermal efficiency compared to 25 to 30 percent for most engines.

More in featured
The Rise of the SUV – Are the Public Mocking the Environmentalists?
January 8, 2020