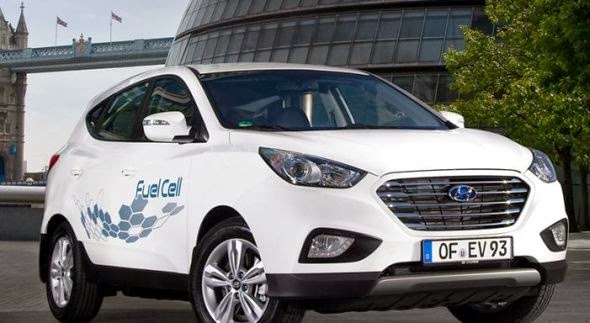 We boldly go into the land of acronym.

For what seems like an eternity, the debate has waged over what should replace the internal combustion engine (ICE), which powers most of our cars and that we all know, but have come to believe has now outlived its usefulness and needs to be replaced before the CO2 content of our atmosphere reaches a critical point.

This week, all eyes have been firmly focused on the LA Motor Show where no less than 3 manufacturers are set to showcase their visions of the future. These are not just concept cars either; these are to be fully functioning hydrogen powered vehicles. Hyundai will be first to pull the trigger as they have announced a late 2014 delivery date for their first offering, whilst Toyota’s and Honda’s offerings will go on sale in California a year later. Right now it is believed that just about every major manufacturer in the world is working on their very own version of the hydrogen vehicle for one simple reason – hydrogen fuel cell electric vehicles (or FCEV, as they have come to be known) are seen as the sensible alternative to ICE and purely EEV alternatives, as they offer the green credentials that eco warriors are demanding along with the range that the average Joe motorists require.

Of course, if FCEVs are so darn good, why are we not already driving them? Well, like all new technology, there are some glitches to consider. The first is the sheer cost of the fuel cell which requires a large amount of platinum for it to work. There have been no price announcements yet but it is rumoured that the cost of the mid sized sedans on offer will be over USD50 000 and perhaps as much as USD100 000. Let’s face it, you would have to have a serious affinity with hemp to want to afford one. Another challenge for the development of this technology and, thus, market acceptance is the generation of the hydrogen and last, but not least, is just where do you fill up?

Honda thinks that it has got much of this licked with the introduction of their new, much smaller hydrogen fuel cell stack, which is about half the size of their earlier model and has roughly 50% higher output. This has been achieved by reducing the thickness and number of plates required, and the new size will enable the positioning of the cell in the engine compartment, with the li-ion battery it feeds placed under the passenger seats and the hydrogen tank over the rear axle. If you happen to be in LA this week, check out the Honda stand where you will see their FCEV, a mid sized sedan with sleek aerodynamic styling.

The launch of FCEVs in California is only possible because of a bill signed into law by California Governor, Gerry Brown. California’s AB8 law, as it is known, has released some USD2 billion in funding to extend the 10 hydrogen stations that are currently available to 25 stations by 2015, to 45 by 2016, and 100 by 2024. It is seen as a declaration that fuel cells are here and California will help kick start the technology by putting an end to fuelling uncertainty. So if you are sitting in downtown or anywhere else, for the next few years you may be able to buy a FCEV but you won’t be able to fill it up with hydrogen very easily, if at all.
Again, Honda has been working on a solution to this with their next generation solar powered hydrogen generation centre. The speed of filling the tank of an FCEV and the range between fill ups are set to rival that of our beloved ICE, but if the hydrogen filling station fails to become ubiquitous, then it is feared that this technology may not be the solution we had been hoping for.

The lack of hydrogen infrastructure is exactly what the likes of Elon Musk has been arguing as a reason why the world should abandon its romance with the FCEV. Musk has gone further and accused FCEVs as being ‘BS’, and their development and introduction is primarily for marketing value. Of course, Musk would say that. After all, he is the Chairman of Tesla, the Californian EV car manufacturer, that has staked its future in battery electric vehicles (BEV).

In some respects, Musk is very right. Infrastructure for EVs already exists by way of electric plug points and power plants just about everywhere, whereas fuel cells will need a crazy amount of money to overcome the ‘chicken and egg’ problem, that is the ‘where to get your fuel from’ question.

Musk wasn’t finished on the subject and the rather flamboyant head of Tesla Motor Co and head of SpaceX, the space rocket and tourism company, said, “Hydrogen is quite a dangerous gas, it is suitable for upper stage rockets but not for cars.” This Hindenburg perception referring to the 1937 disaster that consumed the German airship in New York may be unfounded as the catalyst had more to do with the accelerants that were used to coat the dirigible than the hydrogen used for floatation.

Of course there have been countless tests on the safety of hydrogen. Matt McClory, one of the principle engineers of the Toyota fuel cell vehicle, has confirmed that they had shot at the tank without causing an explosion and Hyundai claims to have burnt a whole vehicle without triggering an explosion. And herein lies one of the safety features of hydrogen – it is lighter than air; in fact, much lighter and, thus, when it is not contained, it rapidly ascends. Hyundai has designed a pressure valve whereby when the temperature rises high enough, hydrogen will vent in a controlled flair pattern.

Of course the same cannot be said for a petrol fuelled car whereby during a fire, the fuel tank will eventually rupture and there will be a fireball. Of course Musk should also remember that people in glasshouses shouldn’t play with stones; after all, in recent months, 3 of his range topping Tesla Model S have caught fire after an accident.

The Next Chapter: Space Travel