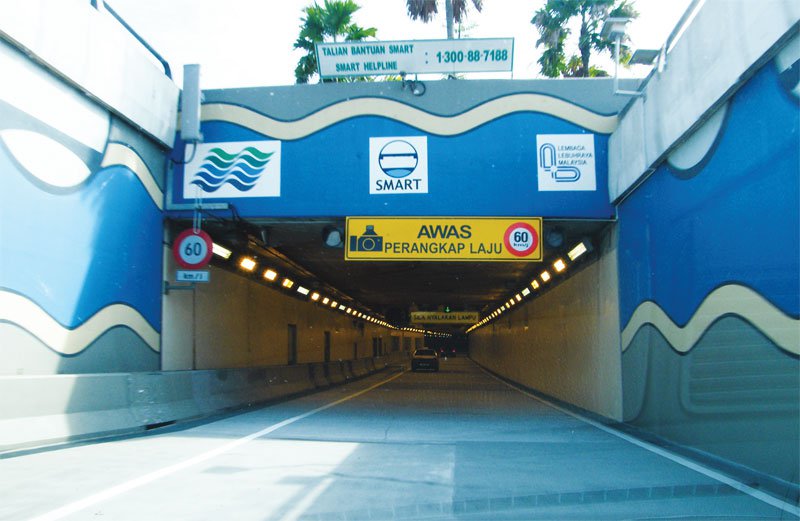 It’s been raining in Kuala Lumpur everyday, and those of us who are familiar with this kind of deluge have started to anticipate news of traffic jams and floods. The SMART Tunnel was built to mitigate floods and road congestion and have, since starting operations in 2007, prevented several potentially disastrous floods. So, as we are weathering the storm, so to speak, here are a few facts about the tunnel that is working doubly hard to keep KL and its roads flood-free:-

It’s called SMART, but not because it’s, well, smart.

Is it an intelligent tunnel? Well, while it is certainly an engineering marvel, it isn’t controlled by some form of artificial intelligence. SMART is the acronym for Stormwater Management And Road Tunnel.

It’s much longer than what you see.

SMART is a combined traffic and storm tunnel, so you might have driven into it and exited at about four kilometres from where you entered, but the double level roadway spans only a part of it. The entire tunnel is actually 9.7 kilometres long, starting from the Klang River at the north to the Kerayong River at the south.

On most days, the roadway portion is open for light vehicles to use. If there is minor flooding of the Sungai Klang and Sungai Ampang catchment areas, stormwater flows through the tunnel, and motorists can continue to use the tunnel oblivious to the rushing stormwater UNDERNEATH them. But if there is a huge surge of water, you’d be required to clear out and even the roadway section will be converted into a stormwater channel.

When floods do occur, the SMART Tunnel is (probably) innocent!

There are two causes of flooding – overflowing of the river or inefficient and drainage systems. When a flood occurs in Kuala Lumpur, chances are it is because of the latter. So, the next time you are caught in a flood in KL (touch wood!), don’t say “the SMART Tunnel is useless!”. Okay, so floods still do happen in KL and quite bad ones too. Those rainclouds are just too stubborn and refuse to stay within the SMART Tunnel’s catchment area.

It REALLY is an engineering marvel. Starting with the tunnelling machines…

The tunnel boring machines (TBMs) themselves were impressive and were considered the Rolls-Royce of TBMs. They were custom ordered from Germany and were each 71 metres long – longer than a 747 and almost as heavy as a dozen of them! One was called Tuah, after Hang Tuah, and the other was called Gemilang (glory). The machine dug and built at the same time; as it edged forward, it lined the newly dug portion with high-grade concrete segments.

The high-grade concrete is the same used to build bomb bunkers.

Does this mean that if our country was ever attacked, we should hide in the SMART Tunnel? Let’s hope we never have to find out. However, we did have a fall-out with a particularly belligerent country recently; but then, that country has nuclear missiles, so we’re screwed anyway.

Planning the route was not so “straight”forward.

In Malaysia, landowners also own everything below the ground…right until the core of the earth. To avoid the need to buy tunnelling rights and spending millions more, the tunnel goes – or rather, snakes – below land that is already government-owned.

The air’s surprisingly fresh down there.

There are air ventilators/escape shafts at every kilometre of the roadway. Besides letting all that nasty exhaust fumes out, it also prevents the tunnel from being overcome with smoke in the event of a fire. That’s good to know, especially if you remember the Mont Blanc Tunnel disaster, during which a truck caught fire and turned the tunnel into a furnace.

Speaking of “below the ground” in Kuala Lumpur, it is a builder’s worst nightmare.

The city of Kuala Lumpur lies on top of karst topography, that is limestone bedrock with sections dissolved into fissures and caverns. This is why sometimes sinkholes occur in the city. When digging the tunnel, which is just 20 metres under the very busy cosmopolis, builders had to go about it VERY CAREFULLY. That said, when they were done, they had gone through enough earth to fill over 500 Olympic-size swimming pools.

The United Nations has given it kudos.

In 2011, the SMART Tunnel received the UN Habitat Scroll of Honour Award for being a unique solution for stormwater management and peak hour traffic. Later, the UN also described it as one of the world’s most innovative projects to address an urban issue. Way to go, SMART!