Will Tesla Get That Sinking Feeling? 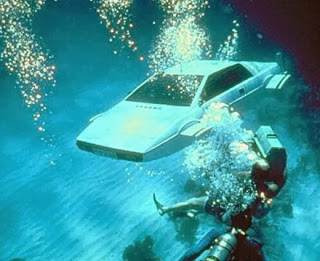 Tesla, shaken but not stirred?
Tesla get into the action.
I musk have that.
Not so secret Tesla.

Oh, how the headlines wrote themselves after Elon Musk, the billionaire entrepreneur, investor and founder of the Californian EV company, Tesla Motors, was revealed as the purchaser of the Lotus Esprit, the car that was the star of the Bond movie, The Spy Who Loved Me. The transaction took place at a recent London auction for a reported GBP600 000.

Musk, who grew up in South Africa and is reported to have vivid memories of the film and the car, is said to be keen to make the car transform from road-to-waves-capable at the touch of a button. In a statement, Musk said, “It was amazing as a little kid in South Africa to watch James Bond in The Spy Who Loved Me drive his Lotus Esprit off a pier, press a button and have it transform into a submarine underwater. I was disappointed to learn that it can’t actually transform. What I’m going to do is upgrade it with a Tesla electric powertrain and try to make it transform for real.”

It is not clear how serious he is as the car is currently not a car, but is in fact a submarine as the auction file lists. Underwater, the Lotus has a turning circle of around 20 feet. Its dive and climb performance is regulated by ballast tanks, and it has been described as ‘crisply argonautic’. However, it is thought that Musk will be using the existing Tesla technology for the conversion. Tesla has a previous relationship with Lotus – one of their original product offerings was in fact a Lotus Elise without the engine.

Unlike what movie magic suggests, there is no comforts of a road car in the interior of this Lotus. All you are going to find inside are its underwater motors, batteries, levers, and other control apparatus, with only a platform seat for its driver. The car was thought to have cost more than USD100 000 to build in the 1970s, and was lost for about 12 years until it was found in a storage locker that someone paid USD100 for in 1989. If Musk can figure out how to make a fully transforming version now, its potential value will be considerably higher.

For those of you that are not familiar with the name Elon Musk, he made his initial fortune as the founder of Paypal before he moved on to such elevated heights of Space X, the space tourism company, and, of course, Tesla, the electric supercar.

More in asia
Air Pollution beyond index in China
December 2, 2015