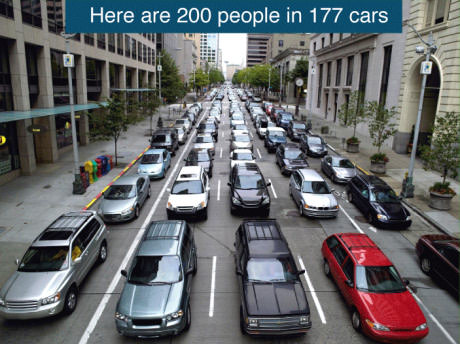 The bane of modern day mobility; the contributing cause of rising blood pressures; the cause of time wasted. Traffic jams are prevalent in most cities around the world. And, perhaps where it hurts most, it costs money. Lots of it. A recent study in Bangkok, Thailand found that traffic jams in the city cost the economy 11 billion baht (US$316 million) annually in “lost opportunities”; in other words, people could be spending their time now wasted in commuting in more productive, revenue-generating ways instead. The study, conducted by the Kasikorn Research Centre, also found that the problem is getting worse – commuters spend 35 minutes more travelling to the capital this year, than last year.

So, why do traffic jams occur in the first place? If we can discover the cause, we must be able to find a solution.

(If you’re too lazy to read on, then just watch this video:)

Is it as simple as there being too many cars on too little road space? Partially. In a 2013 study by MIT and UC-Berkeley on traffic in the Boston area, it was found that only 2% of roads were overloaded while the rest were below capacity; it was the congestion on the tiny percentage of roads that caused a ripple effect.

The study tracked the movement of 680,000 commuters through their mobile phones (brilliant idea, but makes us question data/location security; the study said that commuters were tracked anonymously; if they say so…), and identified a small number of drivers from certain neighbourhoods who were the main problem, because the routes they take heavily utilise the problematic roads.

Then there are traffic jams from which you emerge without any idea of why it occurred in the first place (if you haven’t been through on of those, it’s utterly frustrating, we assure you). A bunch of mathematicians from the University of Exeter figured it out in 2007. They developed a modal to show the effect of a lorry changing lanes and slowing down below a critical speed; the vehicle behind would have to slow down even more, the one behind even more still; this goes on until several miles back, several minutes later, traffic would come to a halt. This is called the “backward travelling wave”.

A Russian physicist, Boris Kerner, mooted the three-phase traffic theory. Kerner distinguished the phases of traffic as: free flow; sychronised flow and wide-moving jam. The theory involves rather complex maths equations but to put it simply, synchronised flow occurs when more cars enter roads and speed decreases. There is a negative correlation between speed and the number of cars. When there are enough cars and the traffic jam doesn’t dissipate after passing the bottleneck, the wide-moving jam occurs.

And then there is the familiarity effect, when people more readily violate traffic rules when they are close to home, which contributes negatively to traffic flow.

So, after all that, what is the solution? Well, using Big Data to plan better roads and road rules, for one. And also, when roads are ruled by self-driving cars, there will be less need to brake and change speed. Hang in there, commuters; the day when roads are free from congestion is not too far in the future.

Jeep gets the Galaxy Note 7 Makeover