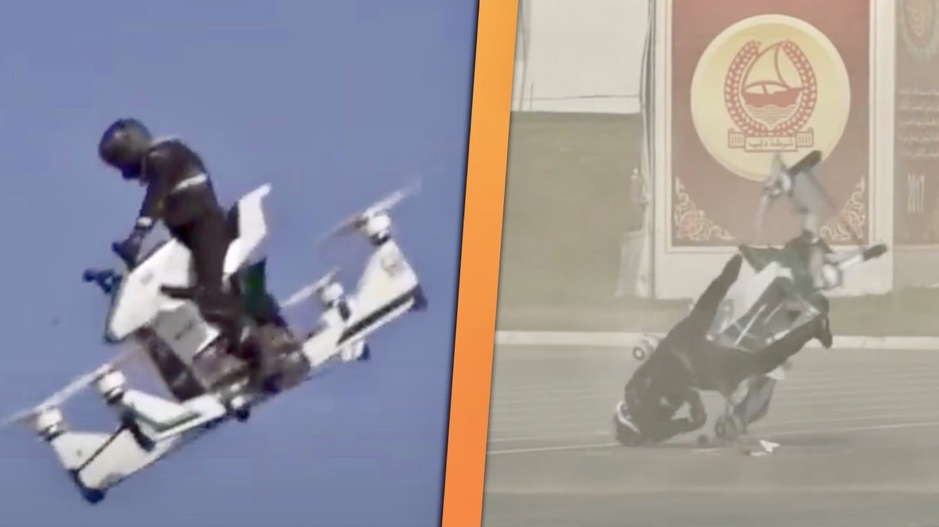 The race to be the first police force to deploy hoverbikes successfully may have just had a major setback as a video of a hoverbike-riding cop crashing into the dirt in catastrophic fashion in Dubai is circulating online.

A while ago, we brought you a story on how the Dubai Police was going to be the first in the world to use hoverbikes as a part of their traffic police fleet. With a maximum speed of just 44mph, it was not going to be the fastest vehicle in the fleet but promised to offer a level of flexibility that has otherwise been unavailable.

The craft, which is a Russian-built Hoversurf Scorpion S3, has been under testing with the Dubai Police and was being videoed during routine testing. The video that is circulating shows the Hoversurf take off somewhat erratically, climb to about 25 to 30 metres and then lose control, and goes on to slam into the ground, shattering bits all over the place and then flips over onto the driver’s head.

Car Memes To Cheer You Up!

We all could do with a laugh.

The Hoversurf is supposed to operate at about 5 metres altitude so seeing it fly up to 30 metres would indicate that there was a problem with the altimeter, but the company maintains that all safety systems worked well despite the vehicle now being in many pieces. According to reports, the pilot was unhurt.

Initially, the video was put on the manufacturer’s website but has since been deleted. Never mind, we managed to find a copy of it. Enjoy:

How To Reduce Risk of Infection While Using Public Transport

More in featured
GM Reveals Electric Car Battery That Could Be A Game-Changer
March 7, 2020