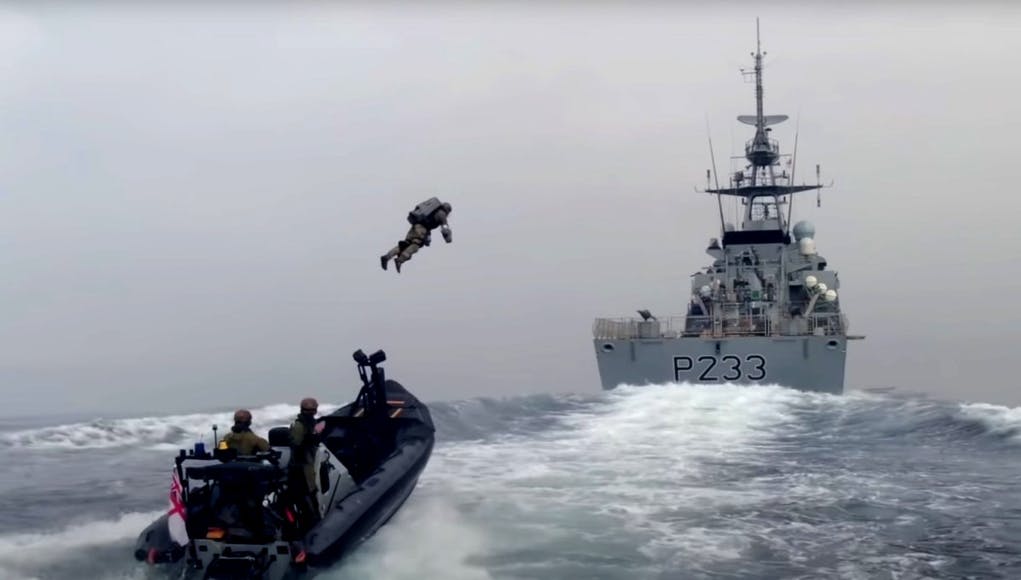 Like Iron Man, or if you’re of an earlier generation, James Bond or The Jetsons, take your pick.

The video shows operators from Gravity Industries launching off inflatable boats and flying quite effortlessly over water to land on a Royal Navy Batch 2 River-class patrol ship that they were tailing, somewhere off the south coast of England.

Conventionally, maritime boarding involves a fast boat travelling alongside the moving high-sided ship and hooking a caving ladder to allow the assault team to gain access. “Visit, board, search, and seizure” or VBSS is a dangerous and tricky business. But with the jet suit, the wearer can board the ship quite quickly and, as one of the tests in the video shows, drop a ladder for the rest of the team still on the speedboat below and then pull out a gun…

According to Gravity, the suit lets the wearer fly at a speed of 80mph and as high as 12,000 feet, using over 1,000hp of thrust. There are four jet engines mounted to the arms and back, and the speed and trajectory are controlled by the positions of the wearer’s arms – so, like Iron Man.

The Royal Navy has yet to decide whether to adopt the technology and was quick to clarify that the “test pilots” were not their marines, although they did admit that the tech was impressive and that they would monitor its development. That’s as neutral an answer as one can give…

Watch the footage of the test here:

The jet suits potentially have broader applications than just for military use. Emergency and disaster response teams could have quick access to victims or disaster sites that have been cut off. Or, we could put little Elroy in one and have him get (or is that jet) to school on time.