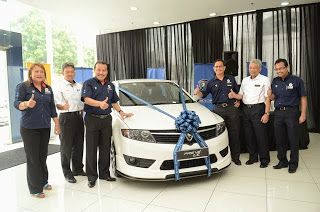 Proton Holdings Bhd has announced an exciting contest that should have Malaysians clambering to Proton showrooms.

The contest comprises of two sections: one is an SMS contest, whereby contestants have to answer 2 questions correctly and be the fastest to respond to win the Daily Prizes; the second portion is a photo contest, whereby participants have to snap a creative picture of themselves with the test drive Proton car and upload it on Facebook.

The prizes for the SMS portion are Daily and Weekly Prizes, including a 42′ LED TV, electrical gadgets and cash prizes. Furthermore, if the participant books or registers a Proton car within the contest period, he or she will be in the running to win the Grand Prize – a Proton Prevé Limited Edition.

Proton has launched two updates on its Prevé: a new colour called Soft Lilac is now available for the Proton Prevé Executive and Premium, to target female buyers; the Proton Prevé LE was also introduced with only 100 units available, costing from RM79 688. The Prevé LE is fitted with, among others, 17″ alloy wheels, 6 airbags and leather upholstery. It is only available in Solid White colour.

The competition appears to be an effort by Proton to mitigate talk around town that the new Prevé and their recently launched Suprima are priced beyond the league of its marque, considering that for about the same price, Malaysians could buy a Japanese or Korean import instead. Proton has been quick to point out that their models have significantly higher specifications and safety ratings compared to price-equivalent imports. Therefore, Malaysians would be getting better value for money if they bought these Malaysian made vehicles instead.

Sounds like a good enough reason to pay a visit to the nearest Proton showroom.

Toyota’s Life after the BRICs

More in autotips
The Longest Running Car Has Travelled the Distance to the Moon 13 Times! Here’s How Irv Gordon Keeps His Car Running…and Here’s How WE Do It
June 19, 2018