Want to Own This Lamborghini Belonging to the Pope? Now You Can! 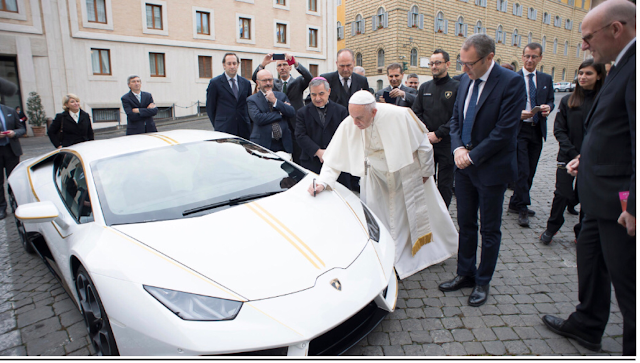 Remember when Pope Francis was presented with a unique Lamborghini Huracán LP580-2 last November? It bore the same white base contrasted by gold striped detailing that imitated the Pope’s cassock.

Well, Pope Francis is having the car auctioned off come May 12, and the proceeds will go to four charities that are “near and dear to Pope Francis’s heart”, but most of it will go to the one that is helping rebuilt homes and churches in ISIS-plagued Nineveh in Iraq.

A normal Huracán, if it can be labelled so, usually sells for US$200,000, but not only is this one a limited edition—limited to one, what’s more—it also bears the Pope’s signature on its hood and has been blessed by His Holiness. Sotheby’s, which is hosting the auction, expects the gavel to drop on anywhere from US$303,000 to 425,000.

And really, it seems like a good idea. After all, the Pope eschews nicer rides in favour of a trusty old Renault, when in the Vatican City, and has even rode a rickshaw to a meeting in Bangladesh. So, the Lambo has been languishing in storage since it was handed over to the Pope.

Wonder how Lamborghini feels about their gift being re-gifted—and so openly. But also, what did they really expect, giving a 573hp V10-engined car with diamond-finished Giano wheels and Bianco Leda Sportivo leather on the inside to one of the most famously frugal persons on the planet.

Now You Can Co-Own a Supercar, Then Make Money When It Is Sold

More in featured
Too Risky To Take The Bus, Too Poor To Buy A Car: How Will People Get Around Post-COVID19?
May 11, 2020