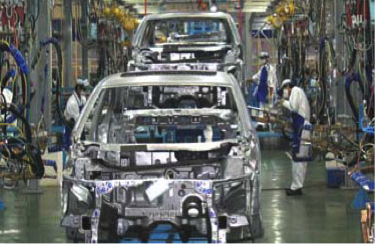 Car sales in Vietnam has decreased by 27% this year because the cars being sold are priced too high for the average Vietnamese, based on remarks made by Nguyen Manh Quan, the Director of Trade and Industry and Trade Ministry’s Heavy Industry Department. Car prices are higher by 20% or more than other countries in the ASEAN region.

Low domestic output, production lines operating at partial capacity and low localisation rate (recently reaching only 10% for small cars) contribute to the augmented prices. On top of that, car buyers have to pay a host of different taxes.

The 18 international car manufacturers in Vietnam employ about 80,000 people and are able to produce 460,000 cars annually. However, the output last year was only 200,000. The Head of the Vietnam Automobile Manufacturers Association, Jesus Arias, has expressed that clear direction is needed from the government for the next five years. By the end of that period, Vietnam would become a full-fledged member of the ASEAN Free Trade Area (AFTA) which entails tax-free imported cars from other members, including China, Japan and Korea. Industry experts are of the opinion that the young industry may not even survive, let alone grow, when the agreement takes effect.