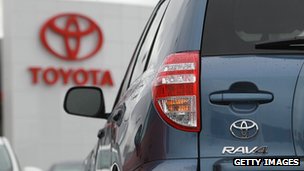 The recalls seem to just keep on coming for Toyota recently, but perhaps the most embarrassing of them all is last week’s announcement that Toyota is set to recall over 800 000 cars in the USA and Canada to fix a problem that was supposed to be fixed when they recalled the same vehicles last year. The two vehicles that are covered in the recall are the Lexus HS250 hybrid and the 2006 to 2011 Rav4 crossover.

In August of 2012, Toyota devised a fix to stop the wobbling of the rear suspension arm that was feared could lead to long term problems, and perhaps failure and a worst case scenario of a crash. However, Toyota has now discovered that the nuts used to adjust the alignment of the rear wheels in those vehicles previously recalled had not been tightened sufficiently.

Toyota had previously announced yet another global recall of its popular hybrid vehicles due to a problem with the hybrid system inverter. The recall will affect approximately 200 000 vehicles, including the luxury Lexus RX400. This may be considered as embarrassing, particularly as earlier stories spoke of how Toyota hybrid technology was viewed as class-leading and set to power Toyota into European dominance; well, at least if you believed Didier Leroy, the President of Toyota Europe, when he stated that Toyota was finding its “hybrid expertise to be a key differentiator “.

The quality woes for Toyota did not stop here when a further announcement detailing the recall of approximately 169 000 vehicles that include the Lexus GS350 and IS350 was made. This is said to be for cars manufactured in between 2005 and 2007, and was due to a problem in the engine assembly process, although no other details were given.

It is to be noted that there are no reports of accidents or injuries attributed to the recalls mentioned. However, Toyota recalls seem to be getting so frequent that there is even a Wikipedia entry on them.

More in featured
Future Roads May Be Made by Knitting
April 30, 2021