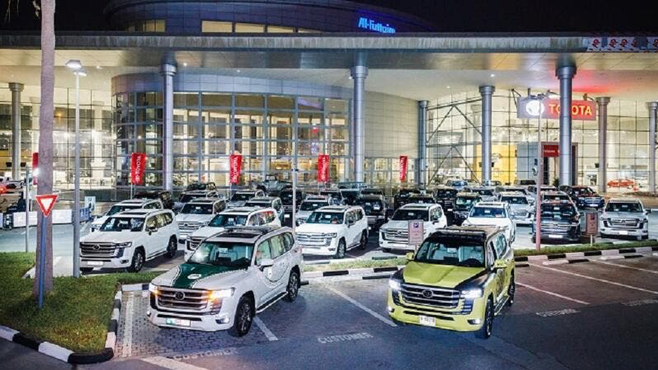 You’ve probably read about Dubai and Abu Dhabi’s police forces using many exotic supercars to catch ‘em baddies. Well, now they are adding the all-new Toyota Land Cruiser 300 to their stable. These vehicles will also be used by the Dubai Civil Defence force. The Land Cruiser 300 replaces the 200 series that has been in production since 2007.

50 units of the 2022 Toyota Land Cruiser 300 were purchased from Al-Futtaim Motors, who are the exclusive distributors of Toyota, Lexus and Hino in the UAE.

The Land Cruiser 300 gets its power from a 3.3-litre V6 twin-turbo diesel engine that churns out 308 hp of power and 700 Nm of immense torque. The Middle East spec model gets a 3.5-litre V6 petrol engine paired to a 10-speed automatic transmission; this motor is capable of pumping 409 hp of power and 650 Nm of torque.

Dubai Police’s Latest Vehicle is Straight Out of Sci-Fi

Goes where no other vehicle can.

The off-road 4×4 model has been fitted with a 3D multi-terrain detector, which lets the driver determine the road conditions, a first for Toyota.

The Dubai and Abu Dhabi police forces are a lucky bunch as they have got a few high-end models, like a Ferrari FF, Bugatti Veyron, several Porsches, Bentleys, McLarens and Lamborghinis, just to name a few, to pick from to go on their rounds. You could say the Land Cruiser 300 will be the toughest yet amongst its peers.