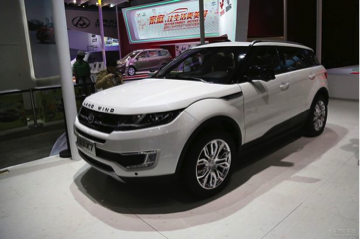 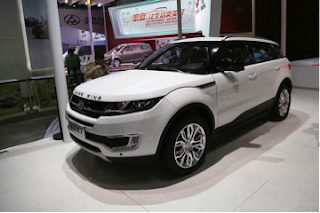 We have become used to the never-ending stream of fake Gucci handbags and Rolex watches (or was that Relox watches?) coming out of China, but a recent trend seems to be the cloning or creation of lower cost facsimile cars from our friends behind the Bamboo Curtain. Is it Convergent Marketing or is it Copying? Well, imported SUV’s are hot property in China but they have to date proven a little too expensive for the average Chinese wallets; this has left an obvious hole in the market for Chinese wannabes to produce their own version of well-known and popular international icons. Here are a few that have caught our attention recently.

The high price of imported SUV’s in the Chinese market has made these cars inaccessible to citizens on a more modest budget, so SUV rip-offs are all too common. Above, on the left, is the Landwind X7, a very close facsimile to the Land Rover Evoque on the right. Ironically, Landwind became the first Chinese automaker to sell its cars in Europe, starting with the X6 SUV in 2005. But the company hasn’t had the chutzpah to sell its X7/Evoque knockoff on the Continent — yet.

The Brilliance V5 is a poor knockoff of the BMW X1, but a great example of how the size and potential of the Chinese market can make strange bed fellows. It is pretty obvious that the V5 is a rip-off of the X1, but our Baverian friends don’t seem to be that bothered, as they are JV partners with Brilliance China Automotive Holdings in a company called BMW Brilliance, a company that builds and distributes BMW’s across China, including the X1.

The first of two entries on this chart for BYD (which is reported to stand for Build Your Dreams) who possibly should change their name to incorporate the phrase rip-off. As of yet, BYD is not cloning the most recent RX, but we are sure there will be one in the pipeline.

Hawtai B35 vs Porsche Cayenne

Yet another SUV wannabe for those on a more limited budget, we give you the Hawtai B35. Hawtai is a Beijing-based automaker that partnered with Hyundai between 2002 and 2010 to manufacture the Korean automaker’s cars in China. One residual from that relationship is the Hawtai B35 SUV, a Porsche Cayenne rip-off built off a first-generation 2000 to 2006 Hyundai Santa Fe platform. Not sure about the Bentley front grille though.

Copying such an iconic vehicle as the Humvee is either the sincerest form of flattery or complete insanity. There are in fact at least three companies building the High Mobility Multipurpose Vehicle (HUMVEE), mostly from badly copied HUMVEE parts. Not so the Dong Feng version, which actually sits on a real imported HUMVEE chassis.

Would you like a fake Rolex to go with your fake Mercedes, sir? There is very little that you could say was original around the BYD S8, but who cares? This has become one of the best-selling Chinese brands. Even the folding sunroof could have been sourced straight from the Mercedes parts bins, sitting next to the head light bins. Even the position of the hood ornament…come on, guys!

First launched in 2008, the Lifan 330 proved to be so popular with its Mini-inspired design that it was actually facelifted in 2013 to stay with the Mini design evolution. This is one vehicle that you can find being exported from China to other countries with lax copyright laws, such as Russia.

Copying the outside of a car is one thing and the Youxia X certainly has more than a passing resemblance to the Tesla S, but when you get into the Chinese Electric Vehicle wannabe, the resemblance just keeps on going. Above on the right is the original and on the left the Chinese imitation; you will see at least a little similarity.

Okay, so perhaps it is the paintwork that makes the resemblance go from fleeting to rip-off, but heck we can certainly see it. The name Lithia is derived from Lithium batteries and allegedly it can achieve a range of 150 kilometres on battery power alone (not sure that we believe that). Built by a Chinese design house, CH Auto, which have aspirations of becoming a Bertone or Pinifarina, the design department there will have to grow a bit bigger and stop photocopying other people’s designs.

Up to now, we haven’t seen too many cars in the bargain basement end of the market. However, if you are not happy with the new Mercedes-Benz Smart ForTwo MKIII offering, then head on over to China where there are plenty of clones on sale. Shuanghuan Bubble is obviously inspired by the Smart ForTwo, but it has a trick up its sleeve – it actually has four seats! Based on a Suzuki Alto Chassis, this diminutive lookalike is also front wheel drive, unlike the original.

Tesla is gonna be pissed with this one!