The Value Of A Life 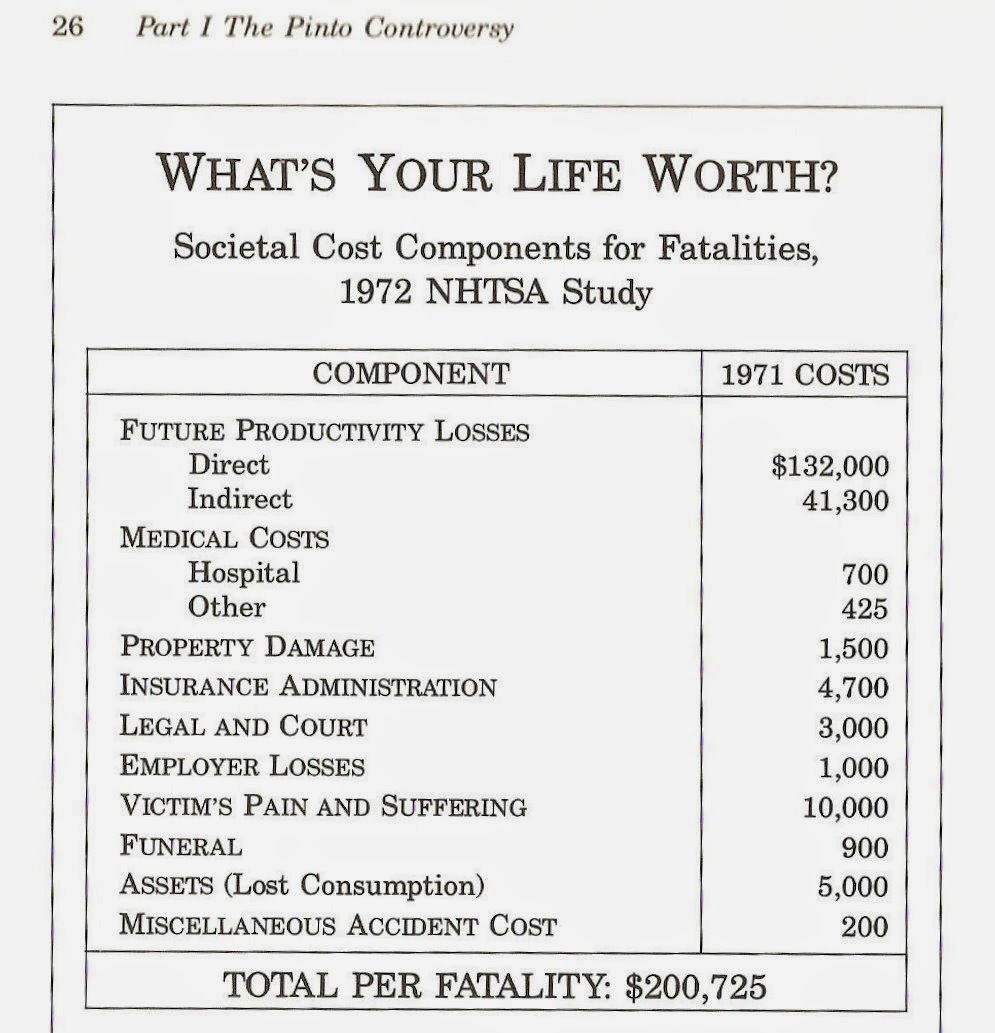 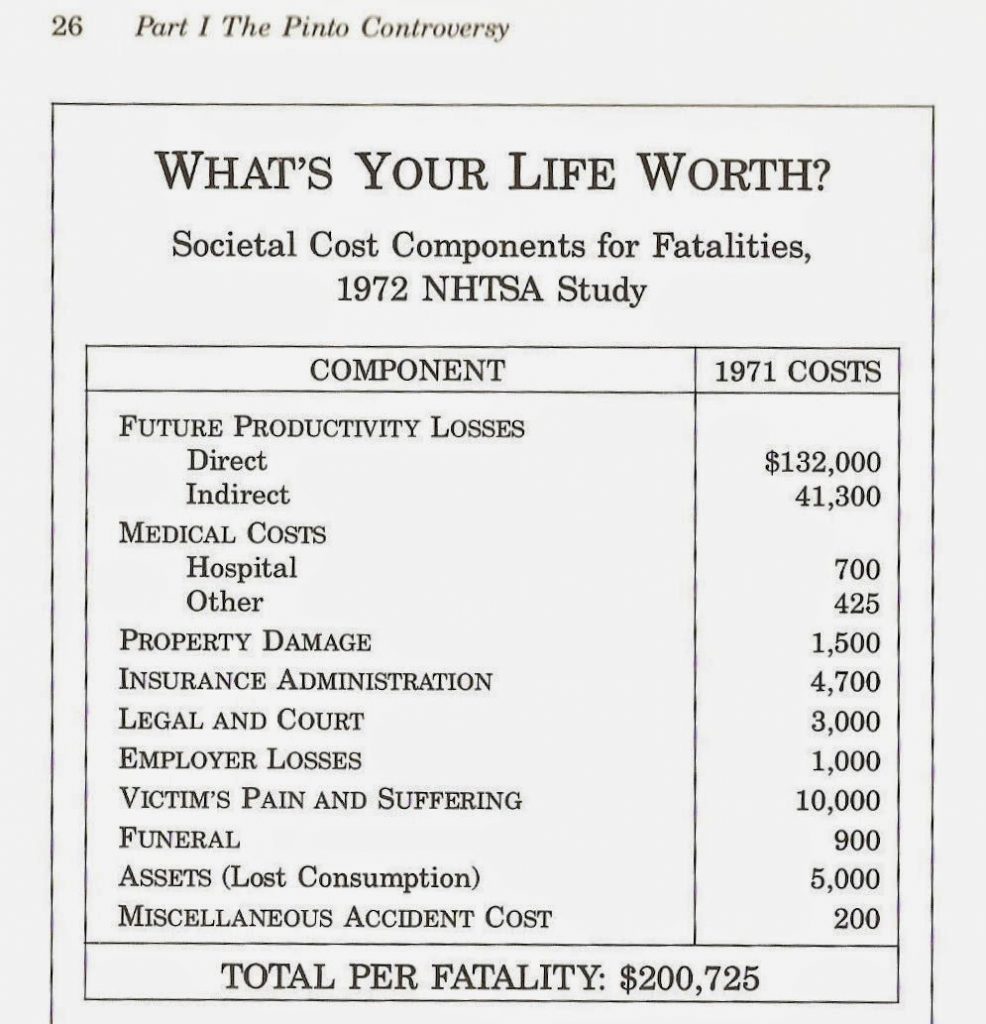 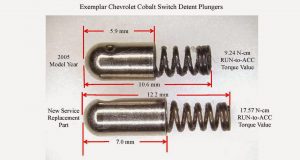 As General Motors scrambles to recall cars, defend and pay off mounting lawsuits, and investigate the reason why the ignition switch problem was not fixed back when it was discovered in 2001, one wonders why GM did not just opt for the safer ignition component, which Reuters reported cost less than a dollar more. Was the dollar saved per car really worth the entire backlash that the company is facing now?

In a world governed by money today, every business uses a cost-benefit analysis, whether a crude estimate or comprehensive calculations, to determine its actions. Let’s go back in time to another case by another American automaker, who employed the cost-benefit method to determine whether or not to make their cars safer.

In 1968, Ford introduced a subcompact car called the Pinto, and accelerated production to quickly command a sizable chunk of the market share. The model’s fuel tank design, however, was vulnerable to rear collisions, and could easily combust during such accidents. A new, safer design was available but would cost USD11 more per car to implement. So, the question arose: to implement or not to implement?

Ford estimated that implementation would preclude 2100 vehicle combustions, 180 serious burn injuries and 180 burn deaths. The automaker assigned a value of USD700 per vehicle destroyed, USD67 000 to each injury and, now comes the controversial part, USD200 725 for each life lost. The last figure was not conjured out of thin air by Ford, but was actually from the National Highway Traffic Safety Administration (NHTSA) which, under pressure from the auto industry to quantify the worth of a human life, calculated it based on loss of future income, medical and legal costs, property damage and insurance, a rather dismal amount of USD10 000 for pain and suffering caused, and so forth.

Now, to implement the new fuel tank design for all 11 million cars and 1.5 million trucks with the faulty design totaled an overall cost of USD137 million. However, Ford estimated the total societal benefits (including the lives saved) would only be worth USD49.5 million. Based on this cost-benefit analysis, the benefits of a new fuel tank design could not even recoup the cost, so the safer version was a ‘no-go’. 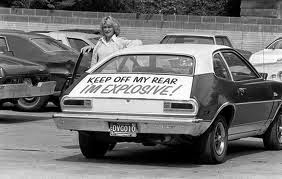 Naturally, when this bit of information was brought to light after several fatalistic accidents later, jurors and the public were livid that a value could be assigned for a human life, especially a value they deemed was insultingly low. Unfortunately, today, everything (and everyone) can be tagged with a monetary value to compare the worth of disparate items.

Now, let’s return our present case with GM. Thus far, about 2.2 million cars have been recalled. If Reuter’s report is correct and if GM had decided to utilise the safer ignition switch, their cost would increase by less than USD2.2 million (a rough estimate, not taking inflation into consideration). The 13 lives that were lost in related car accidents, based on NHTSA’s value in the seventies, totaled to USD2.6 million. According to GM, it will take a USD1.3 billion charge against first-quarter earnings for the cost of the recall, which include fixing the switches and providing loaner cars. The person in GM who did the cost-benefit analysis in deciding implementation of the safer ignition component had better take math classes again.

Tesla, on the other hand, had decided to add a triple-shield on the underbody of the Model S to reduce the risk of battery fire. There is no information available on the cost of the addition, but part of the shield uses titanium, which is extremely strong and light but also expensive. Elon Musk had insisted that the Model S is safe as it is and has implied that the triple-shield is more for peace of mind than anything else. So, perhaps Musk’s cost-benefit analysis includes brand reputation and trust as part of the ‘benefit’ equation.

Of course, one can also argue that the Model S sells for USD70 000 while the GM models being recalled, the Saturn Ion and Pontiac Solstice for instance, retailed for only USD12 000 and USD24 000 respectively, which means that Tesla most probably have a larger profit margin to play with. On the other hand, GM sells vehicles by the millions and would still be able to make a tidy profit even with added cost. This Socratic argument could go on and on. One thing is for sure – as a consumer, we hope that the automakers whom we buy cars from place an infinite value on our lives.