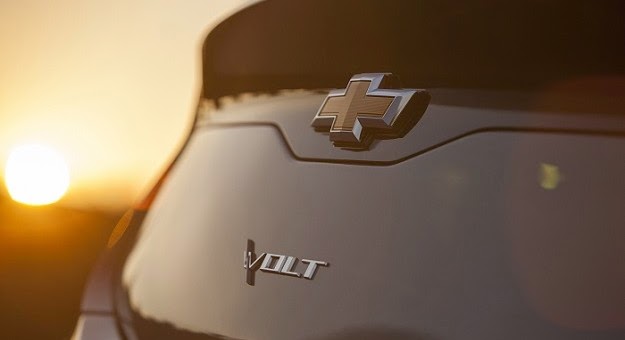 Chevrolet’s Chief Marketing Officer, Tim Mahoney, teased the audience that gathered at the 2014 Centre for Automotive Research Management Briefing last Thursday with a single image of the upcoming 2016 Chevrolet Volt.

The image revealed little of the next generation Volt, besides a close-up of its rear-end sporting the marque’s bow tie and Volt badge, and Mahoney did not offer much details of the vehicle which will be unveiled at the 2015 North American International Auto Show during mid-January next year. It is speculated that the new Volt will include a third seat in the rear, and will be powered by a 1.0-litre, three-cylinder engine, downsized from the current 1.4-litre, four-cylinder.

Mahoney said, “Rest assured, this vehicle will be better than ever. For me, it’s really the purest expression of ‘Find New Roads,’ if ever there was one: advanced technology at its soul and innovation in its heart. It’s the kind of cutting-edge technology that has long sort of set Chevrolet apart.”

‘Find New Roads’ is Chevrolet’s marketing campaign intended to communicate the marque’s new way of thinking about its customers and pursuing all of its market segments with gusto as it embarks on a string of new product launches. The 2016 Volt will be one of five redesigned or new vehicles that the American automaker plans to launch next year, although Mahoney again chose to be close-mouthed about the other four.

The sales achievement of the Volt has been somewhat of a puzzle. Owners of the plug-in hybrid EV trumpet their love for their Volt’s, reflecting high customer satisfaction ratings and very few quality issues. Yet, despite the former General Motors CEO, Dan Akerson, projecting a production of 60,000 units per year when it was launched in 2010, Chevrolet has sold only 65,000 Volts in the nearly four years since. Even when the price was cut by US$5,000 to US$35,000 a year ago, sales has fallen by 9% for the period of January to July 2014.

An encouraging sign, Mahoney points out, is that 69% of Volts are sold to previously non-GM vehicle owners. “The Volt has done what it is supposed to do,” he said, and the automaker expects sales of the second-generation to do much better. To do so, the 2016 Volt has to deliver significant improvements, including longer range and the additional seat. The current version could not accommodate a fifth seat because the chunky 400-pound T-shaped battery pack took up the space instead.

Car Materials Of The Future