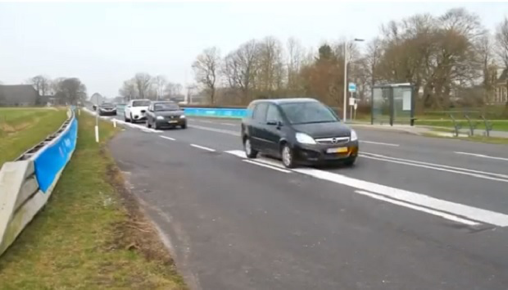 If you don’t live around the Dutch village of Jelsum or is new to the place, you will be pleasantly surprised to hear a tune when you drive along a stretch of road there. But soon the novelty wears off and it will drive you mad. Locals have gotten sick and tired of the melody and it keeps them awake at night.

‘Rumble strips’ are often placed at the side of major roads to warn drivers of straying off course when their car tyres go over them. The ones laid across the roads in Jelsum play the anthem of the Friesland region (the northern part of the Netherlands of unique language and culture), best heard at the correct speed limit of 40mph. But it is loud and the sound travels, and it can get pretty annoying if you happen to live around the area. And it plays ‘in time’ with the vehicles driving on them.

“Last Saturday night, the taxis were driving from Leeuwarden to Stiens and on the way back, they tried to go across the lines as quickly as possible and we had the anthem played all night at high speed,” said local resident Ria Jansma.

Local authorities have agreed to remove the rumble strips this week. The ‘Sound of Silence’, perhaps, would be better.