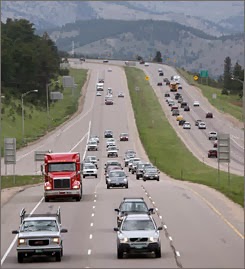 In a recent study by Michael Sivak from the University of Michigan’s Transport Research Institute, the distance traveled by light duty vehicles in the US has decreased since peaking in 2006. In 2011, Americans drove a total of 2.647 trillion miles, compared to 2.773 trillion miles in 2006. In 1984, the total distance driven was only 1.559 trillion miles.

The research examines vehicles including cars, pickup trucks, SUVs and vans in the US from 1984 to 2011. It also looks at trends of driving per person, per household, per license and registered vehicles. It turns out that the number of registered vehicles had already reached a maximum 5 years ago. Furthermore, the rates of distance driven per person, per licensed driver and per household are down 9% since 2004.

According to Sivak, this downward trend is partly a result of increased telecommuting, usage of public transport, urbanisation of the population and the age composition of drivers.

If this trend continues, it will inadvertently lower the local consumption of fuel. Some experts already predict that the US will become a net exporter of oil by 2020. Besides the development and implementation of automotive technology in the country, which necessitates less fuel for the same level of efficiency, if Americans continue to drive less and thus require less fuel for it, the country will only have that much more oil to sell to others. They may well be the world’s oil giant for the latter part of this century.