“Red Light Peddling” On the Rise in Malaysia, But Buyers Could Be Fined RM2,000 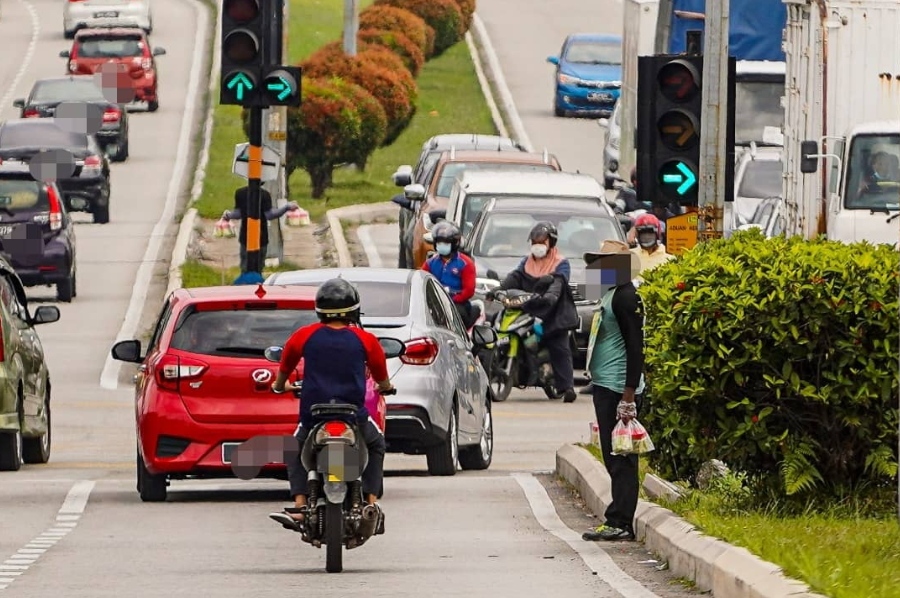 Automologist LING agrees that it is dangerous but thinks there must be another solution.

The pandemic signalled the end of many a rice bowl, but a new type of business has emerged here on the roads of Malaysia, and that is peddling at the traffic light or rather “red light peddling”. This is when peddlers sell their wares to motorists who have stopped at a red traffic light. Captive audience with only minutes to make a decision; relatively cheap yet desirable product on sale – it’s a recipe for success.

The peddlers in my neighbourhood mostly sell pickled mangos and cups of cold Milo, sometimes advertising their wares on cardboard signs slung from the neck. They are never pushy and walk along unintrusively until a motorist waves them over.

Most of these peddlers I’ve encountered look like teens who should be in school, if school was open. My assumption, and I assume other motorists would think the same, is that these young people were pacing the roads under the hot sun to help their families who have fallen on hard times. (Child labour concerns aside for this article, but something that is imporant and the goverment is aware off.)

Public sentiments are generally sympathetic – most people appreciate that they are trying to make an honest living, and pickled fruits with asam (a type of preserved plum) powder is seriously delicious. Turns out, it is also a lucrative business. A pickled mango supplier in Melaka shared with a local online media that he supplies about 15,000 jars of product a month; at RM10 a jar, that’s RM600,000 worth of pickled mangos sold in a month.

But as appealing as these wares would be on a hot day and as charitable as you might want to be, the Police Chief of Johor, the southernmost state of West Malaysia, has reminded the public that this type of trade is against the law, emphasising that it is a dangerous activity for both parties. Datuk Ayob Khan Mydin Pitchay said that, according to the law, both the vendor and buyer can be fined for engaging in this trade, and buyers could be slapped with an RM2,000 fine.

Why Do Car Parks Have “Park At Your Own Risk” Signs?

Hint: It’s to protect their behinds.

Now, you might think that these vendors are doing no harm and that the authorities are being unnecessarily harsh. But Datuk Ayob’s caution is valid. After all, it is the local culture for motorcycle riders – and almost half of the vehicles on the road are two-wheelers – to lane-split. At a red light, especially, they would ride between the larger vehicles until they reach the front of the queue. An unsuspecting peddler could very easily step into their path or the motorcycle could plow into an arm (or head!) protruding from a vehicle…

Datuk Ayob advised these vendors to sell at a safe location and there are discussions online about setting up a proper place for them to peddle their wares, but that really takes away all the advantages of red light peddling. Instead, I would suggest something that combines roadside stalls and a drive-thru, with a wide purpose-built road shoulder where vehicles can slide into and stop right next to the stalls, which are also protected by safety bollards. So the vendors can earn a living, stay safe and out of the sun, and we can still have our pickled mangos and not lose an arm (or head!) or get fined for it.