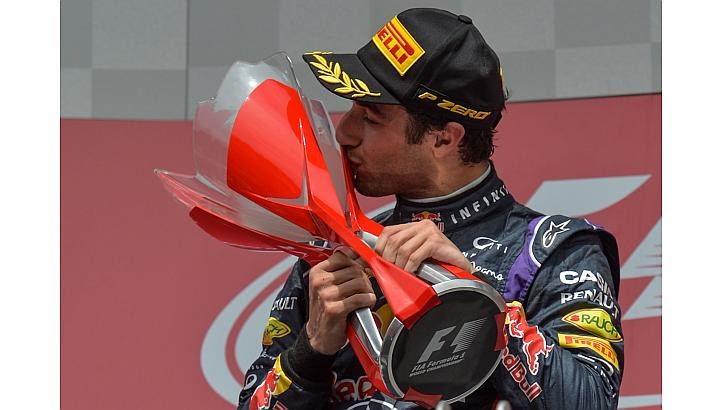 The results were completely unexpected. Mercedes’ domination of the 2014 season has come to a startling end (or momentary interruption, depending what happens in the upcoming races). In fact, until the end of the race, it looked like Nico Rosberg would be claiming his third victory of the season until Daniel Ricciardo, who had two fourth-place and two third-place finishes before adding this win, managed to pass Rosberg when there were only two laps to go.
‘It’s still a little bit surreal. It’s not like we were leading the whole race, so it’s not like I had time to understand that I was going to win,’ the Aussie said. The affable 24-year-old appears to be well-liked by his team mate as well as other racers and the press, who were effusing praises and congratulations for the first time F1 winner. His victory was partially attributed to luck – good luck for Ricciardo but bad luck for the Mercedes duo.
The race began with Rosberg at the pole and team mate, Lewis Hamilton, on his tail, until both cars experienced a sudden loss of the engine’s hybrid power. They hanged onto their lead and was heading for the sixth Mercedes 1-2 win until brake failure in Hamilton’s car forced him to retire from the race. Rosberg, who was conserving his brakes and had insufficient power, finally had to give up his lead to Ricciardo. The Montreal track is known to be unpredictable, and by the end, only 11 out of 22 of the cars remained on the track.
Rosberg still maintains a comfortable lead in the drivers standing with 140 points, and with a widened gap between him and Hamilton who remains at 118 points.
image: straitstimes.com