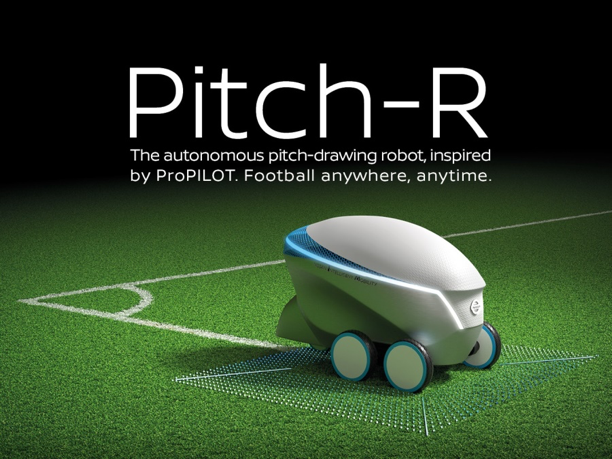 Nissan capitalised on its sponsorship of the 2018 UEFA Champions League Final in Kiev, Ukraine to unveil its latest product development called the Pitch-R. It is a self-driving football-pitch-drawing robot that was designed to encourage and excite grassroots football players.

The Pitch-R uses a four-camera vision system, GPS tracking and collision avoidance system to draw the field to your preference, in a 5-, 7- or 11-a-side football pitch, wherever there is space.

Jean-Pierre Diernaz, Nissan Europe’s Vice President for Marketing, said: “That’s the passion which drove our design and engineering team to create Pitch-R. It injects the best of Nissan technology into an innovation which can benefit grassroots football, and excite and engage young fans.”

Football fans will be glad to know that the bot can draw lines on grass, tarmac or gravel using an eco-friendly paint that dissolves on its own.

And you don’t have to wait an eternity because the entire process of creating a football field with Pitch-R takes under 20 minutes, and it is powered by a rechargeable battery pack.

Once it is activated, it will move autonomously to scan its surroundings in real time and quickly search to find a suitable space. Uneven surfaces are not a problem as it can navigate around obstacles.

Meet the #Nissan Pitch-R, an autonomous robot that can paint the lines of a football pitch all on its own… pic.twitter.com/ZEea52xQoa

While it may be smart, it’s not completely independent as you do still need to be there to actually find a suitable space first.

As Maarten Sierhus, Director of Research at Nissan’s Silicon Valley Research Centre, points out: no autonomous system will ever be able to work without any sort of human input at all.

Once you think you have a patch of land, the Pitch-R will scan it to make sure it can be used and then it will set to work.

Basically, you can have your own footy-playing whenever you can find decent enough space.

The first time this technology was introduced was at the CES early this year. Called the B2V technology (Brain To Vehicle), it can interpret a driver’s brain waves to predict actions the driver intends to take next.

It can also recognise when a driver is about to brake or turn, allowing the car to initiate the action between 0.2 and 0.5 seconds earlier.

Nissan utilised the 2018 UEFA Champions League Final to inspire seven young people from two grassroots organisations: Sports Dans La Ville (France) and Street League (U.K.). These youngsters were given the chance to attend the final and meet the star players.

Oh, and talking about football, our sponsor X-1R is running a campaign whereby you can be one of the lucky few who wins a signed shirt from football’s rockstars, such as the likes of Neymar, Messi or Ronaldo : http://roadtorussia.x1rasia.com/

Click here to join the Road to Russia contest and win a signed shirt by Neymar, Messi or Ronaldo!

Man Loses Teeth After Being Punched by Grab Driver