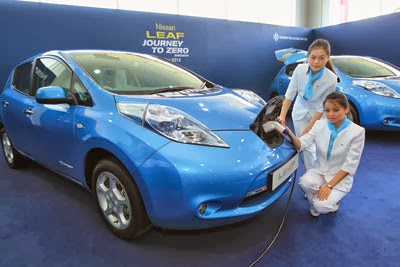 The debate between automakers and environmentalists on whether hybrids and electric vehicles (EVs) are truly eco friendly or simply delaying the inevitable continues. But lets just say we forget about the environmental factors for a few seconds, and consider a hybrid or EV simply because of the potential cost saving from fuel reduction or elimination. If you are more concerned about the situation in your bank account rather than the condition of our earth, is a hybrid or an EV the vehicle for you?

There are several factors that have to be considered – the initial vehicle cost, the price of petrol and electricity in your country and maintenance cost. In this very brief exploration of the subject, we shall use Malaysia as our study where the price of petrol has seen a 10.5% hike recently and interest in hybrids is on the rise. Prepare yourself for substantial number crunching coming up…

If your petrol bill is MYR500 a month, then it can be reduced to MYR365 using the Civic Hybrid, with a MYR135 savings a month. The extra MYR4000 to purchase the hybrid version would be recouped through savings after 30 months. By the eighth year, you would have still saved MYR8960. Sounds pretty good.

But wait. After that, the battery warranty runs out and it is about this time that the battery requires a change. In June this year, Honda Malaysia reduced the prices of hybrid battery replacements – the Civic Hybrid’s battery received a price slash from MYR11 480 to MYR5480. However, suddenly the MYR8960 you thought you saved is also slashed because of the battery replacement cost, to about a mere MYR3480.

Still, if you held onto the car until its fifteenth year, you would save MYR14 820 with the Civic Hybrid compared to the Civic 1.8S. A few potential divergences to note: considering that the price of fuel will continue to increase, the savings should be even more; considering that if you drive a lot more in the city, the savings could be less.

So will the hybrid help you save money? The answer is YES, but maybe not as much as you expected. Keep in mind however that the tax incentive for hybrid cars is only until 2013 and there is still no news of an extension. If you’re keen to buy a hybrid, make it soon.

Then how about we just eliminate the need for fuel completely? Enter, the electric car!

The second EV in Malaysia will be the Nissan Leaf, rumoured to be launched in November this year. So, will this be Malaysians’ answer to reducing spending on transportation?
The Leaf’s battery holds a 24kWh charge. At a rate of 21.8 cents/kWh in Malaysia, it would only cost MYR5.23 for each full charge. The general real world (compared to the manufacturer’s claims) concedes that the Leaf goes about 75 miles or 121km on each charge. Here’s how the numbers go:

So, in theory, it only costs 36% to power the Nissan Leaf compared to the Honda Civic Hybrid. Back to our initial assumption that you currently spend about MYR500 a month on fuel for a ‘normal’ car. It would only cost MYR131.40 to power up your Nissan Leaf each month. Now, that sounds really awesome.Wait. Not so fast. There has been mention of a MYR150 000 pricetag from Tan Chong Motors, the distributor of Nissan cars in Malaysia. That’s MYR30 020 more than the Civic Hybrid. You would recoup the difference from power savings only in the 129th month, that is, almost 11 years.For now, there is no news on the cost of battery replacement in Malaysia but in other countries, the Leaf’s battery can cost about half of the vehicle’s retail selling price. Not sounding so awesome anymore, right? On top of that, if the tax incentive is not extended, the cost of this EV may go even higher.So, unless there is a cheaper EV option in the Malaysian market, we would give this a pass and scream “LEECH! LEECH!” everytime we see a Nissan Leaf on the road.

Malaysians vs Singaporeans: Who’s Worse Off?