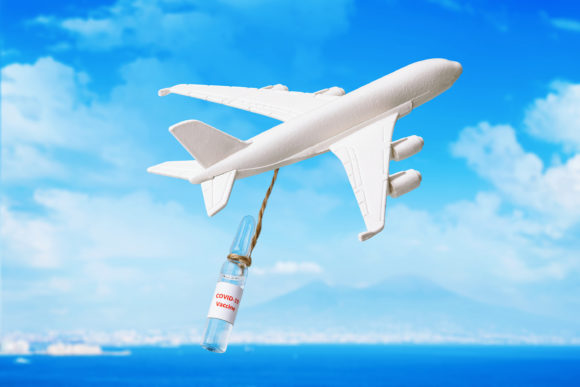 Airlines around the world are teetering on bankruptcy as air travel has all but stopped since the start of the pandemic, rendering their service redundant. But soon, with not just one but several COVID-19 vaccines already found, they might have an important role in saving the world. As the vaccine producers, namely Pfizer and Moderna, are racing to get approval for their discoveries, the groundwork is being laid for their worldwide distribution and the fastest way to ship them is by air.

The International Air Transport Association (IATA) estimates that a single dose for 7.8 billion people, the world population, would fill 8,000 747 cargo aircraft. The Pfizer vaccine further comes in two doses and has the added complication of requiring it to be kept at minus 70 degrees Celcius, much lower than the typical freezer. The pharmaceutical company’s plan at the moment is to ship the vaccine in temperature-controlled thermal boxes with dry ice. And while Moderna’s vaccine is stable at a higher temperature, it still needs to be shipped at –20 degrees Celsius.

American Airlines has announced that they had started conducting trial flights from Miami to South America to ship thermal packaging, although not yet the actual vaccine, but has already set up a “network of team members that specialize in temperature-critical shipments,” the company said in a statement to ABC News.

Meanwhile, Forbes asked a mathematician to, er, do the math and she, Professor Anna Nagurney, from University of Massachusetts, who is also a logistics expert, said that if planes were filled to a capacity of 100,000 doses a flight, there would be around 60,000 flights to transport 6 billion doses.

This Could Be How We Get Around In the Future.

However, she added that not every destination requires 100,000 doses, so more flights will likely be needed to reach every distribution hub in the world. International logistics companies are gearing up to distribute these vaccines: UPS is building two freezer farms – one in the USA and another in the Netherlands – that can store millions of vials and FedEx has added at least 10 freezer facilities to their infrastructure.

Since the pandemic began, passenger aircraft have been converted to transport PPE equipment, ie. masks, gloves, etc, from China. Besides having their underbelly cargo hold filled to capacity, these ‘preighters’, as they are being called, have had their passenger seats removed to increase cargo capacity.

Airline management and employees must be breathing a sigh of relief as they envision planes once again taking to the skies, but this time occupied by vials of vaccines. The vaccines are pleasanter and more welcomed than passengers, that’s for sure.