Over 130-Car Pileup In Texas Caused By Icy Road Condition 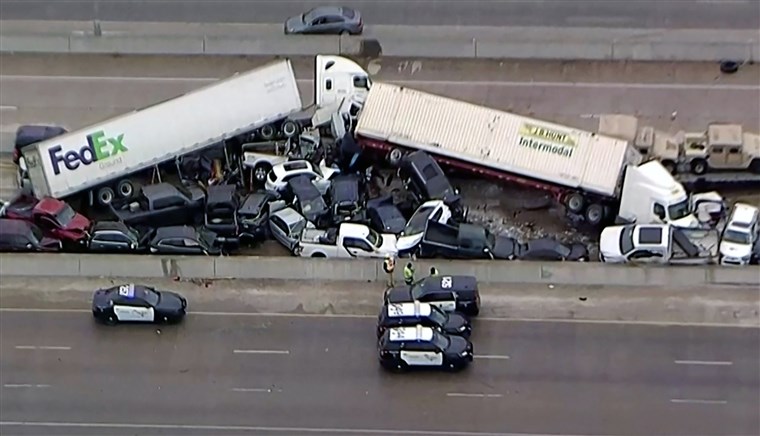 A winter storm in parts of the USA earlier this week brought with it frigid rain, sleet, and snow. On Thursday morning, around 6am, a slippery stretch on Interstate 35 caused a massive pile-up involving over 130 cars. The great mesh of crushed metal and broken glass was built upon as cars, trucks and semitrailers slammed into each other, some climbing on top of others.

Many people were trapped inside their vehicles as the fire department scrambled to free them with hydraulic rescue equipment. As the incident took place early in the morning, there were many healthcare and emergency workers (nurses, police officers, and such) who were involved; a number of the victims were in hospital scrubs and wearing their hospital ID tags. Fortunately, also due to the time of the accident, there was not one child involved.

Witnesses who were involved described what seems like a chain of multiple crashes intersperced with screams of the drivers.

When first responders arrived at the site, they were slipping and sliding as they tried to get to the victims, as it was like “stepping on an ice rink” as one victim described to Fox News. Sand was quickly brought in to pave the roads and make it easier for rescuers to get to the victim. There are at least six fatalities confirmed so far.

While the idea of an over-100 car pileup is mind-boggling, it is still not among the largest vehicle pileups in history. Bad weather, though, like heavy fog or rain, is always the reason for these massive chain accidents. Dense fog caused the worst ever car pile-up that occurred in Sao Paulo, Brazil  in 2011 when over 300 cars crash into one another along a two-kilometre stretch of road, with some vehicles catching fire. Miraculously, though, there was only one fatality in that incident.

More in featured
What to Avoid and What to Drink When Riding
March 4, 2020