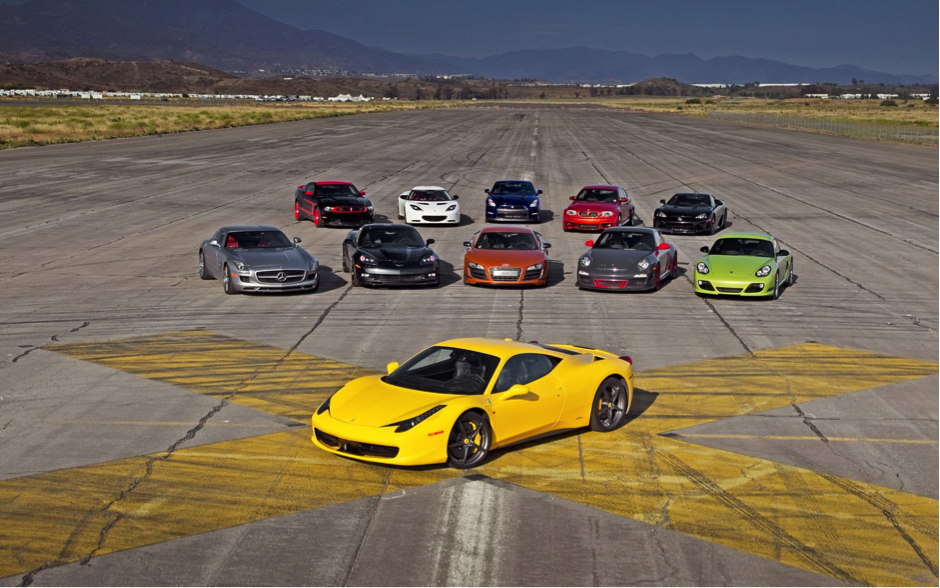 Automology’s guest writer, RICK, might have just fallen in love (with a car, that is).

Every so often, the carmakers would produce a supercar claiming all sorts of superlatives to go with it. But which car is truly the best? I’ve just watched all 3 recordings of the ‘World’s Greatest Drag Race’, an annual face-off between supercars since 2011, racing across a quarter of a mile to the checkered flag to earn the bragging rights as the fastest of the fastest cars. In other words, the automakers can talk the talk, but can their cars really…race the race?

In 2011, 11 models (pictured above) from various marques were tested, including Nissan, Ford, Porsche, Ferrari, Audi, Lexus and so on. The car that was first to cross the finish line was Nissan’s GT-R R35, defeating the Ferrari 458 Italia by 0.1 seconds. What’s more interesting is that the Nissan supercar cost only about USD90 000 and left its USD200 000 (thereabouts) competitors in its dust.

In 2012, there were only 9 cars competing, but saw the participation of Lamborghini and Mclaren. The GT-R R35 still managed to hold its own, finishing the race faster by 0.1 seconds compared to the year before. Still, it could not outrace the LP700-4 & MP4-12C, which shot pass the checkered flag an entire second faster. Behind the GT-R R35 was Ford’s muscle car, the Shelby GT500.

The latest race, in 2013, saw 12 cars competing in the increasingly popular drag race. The latest models from Aston Martin, Jaguar and Bentley also joined the race, but they still couldn’t beat the GT-R R35, which again improved against its own 2012 performance by 0.1 seconds and emerged the winner for the second time.

Nissan claims that its GT-R is not a supercar, it is THE supercar. After its amazing performance in all 3 races, we think that Nissan has the right to boast, don’t you? If you’re not convinced, watch it in action here: