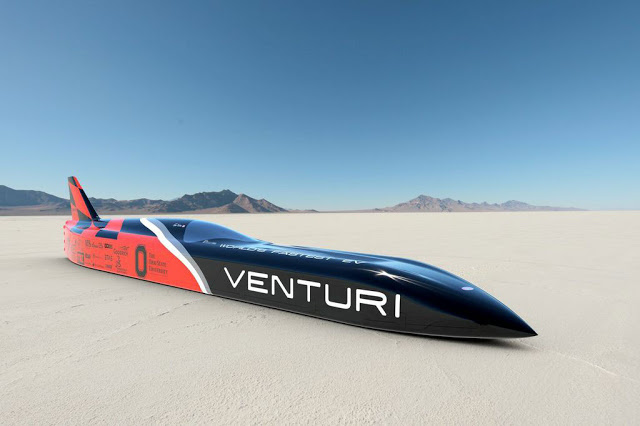 The land speed record for the fastest electric land car has fallen to the French electric car specialist, Venturi Automobiles, and their Ventura VBB-3 at the de facto home of land speed records, the Bonneville Salt Flats in Utah, US of A. The French offering managed to clock a top speed of some 386kph (approx. 240mph) in conditions that can best be described as not ideal.

Despite a decade-long drought of biblical proportions blighting the western half of the US for the third year running, the annual speed week on the Bonneville Salt Flats, an area known for low precipitation, was almost washed out, as it was last year. In normal years, the area around the Salt Flats will be dry with endless blue skies, but again the storms came and transformed the usual hard-packed, super flat salt surface into a quagmire of salty slush.

After having to abort the run last year, the Venturi team was more determined than ever to have a crack at the record. After August 15, the conditions started to improve and they managed to get the preparation trucks to smooth things out enough to create a safe track. The salt was still wet and muddy, and the track was 16km instead of the planned 19km…and it was bumpy; so bumpy, in fact, that during practice, the ground conditions caused vehicle vibrations and electrical problems.

Team Venturi pressed on and decided to go for the record attempt on August 21. Driver, Roger Schroer, jumped into the cockpit and sped across the prehistoric lake bed, achieving an average speed of 386.757kph after exiting the flying mile at 463.4kph. That 387kph was well short of the absolute world record, but it did best last year’s 339kph for a new record in the over 3.5-tonne category.

“In eleven years here, I have never driven on such a difficult track,” said Schroer. “The car was sliding on the surface from one side to the other due to soft spots and bumps.” So bumpy it was that the cooling tank broke on the return run and hence that was the end of any further attempts at besting the record.

“We went faster than we have ever gone with this vehicle, but it was a very difficult week on a very bumpy track and we have done some damage to the vehicle from extreme vibrations,” said David Cooke, team leader with The OSU Center for Automotive Research. “Still, I am confident that with a smooth track the VBB-3 can reach its target speeds.”