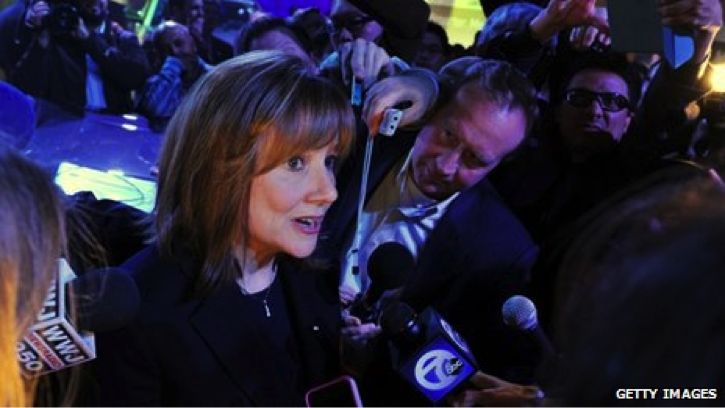 At the recent Detroit Motor Show, journalists were tripping over themselves to catch a glimpse of the latest boss of General Motors. Her name is Mary Barra and she is the first woman to be in charge of a major car company anywhere in the world. Her rise to power is so unique and remarkable that President Barack Obama thought that it merited a mention during his recent State of the Union address, saying, “How the daughter of a factory worker is CEO of America’s largest automaker” and thus evidence that the American dream is still alive and well.

Back in December when news of her appointment broke, there were many raised eyebrows, possibly because in Motown the word “she” is usually reserved for a sexy sports car. But a former GM Chairman, Bob Lutz, maintains that he is not surprised that the 52-year-old Mary Barra has risen to the top job.

“People ask can a woman be a car guy? Of course she can,” Mr Lutz said in an interview. “All you have to do is look at the GM products that have been executed under her – they’re all smash hits. Mary is the right person for the job, no question about it.”

Barra is very much the daughter of Detroit; many have said that GM oil probably runs through her veins. Growing up in Waterford, Michigan, she would have seen her father go to work every day at the local Pontiac plant where he worked as a diemaker for 39 years and where she was destined to work as well.

Barra is the first woman in her family to go to college when she attended the General Motors Institute (renamed Kettering University) and following that became an intern at the same Pontiac factory where her father put in some many years.
In 1990, Barra won a place on the fast track programme and was awarded a GM fellowship to Stanford where she read for an MBA. Newly qualified Barra went on to master some very diverse jobs, amongst them, assistant to CEO Jack Smith, Assembly Plant Manager, VP Global Manufacturing Engineering, Human Resource Chief and Head of Global Product Development.

During the 2009 bankruptcy, Barra was in charge of HR and her no nonsense approach enabled the simplification of employee rules and boiled the company’s 10-page dress code down to two words – “dress appropriately”. During her time as Product Chief, she was involved in the restructuring of Opel and it is then that she began to push GM to build better vehicles on fewer platforms.

Some controversy occured when news of her compensation package compared to the outgoing Dan Akerson seemed to suggest that she was being paid significantly less. Akerson was paid a base salary of USD1.7 million and up to USD7.35 million in short term compensation, compared to USD1.6 million base pay and USD2.8 million in short term compensation for Barra. But when you read between the lines, Mary had negotiated a long term package that would see her earning perhaps as much as a further USD10 million in long term bonuses. Guess you could say she knows she is good.

Well done, Mary. We wish you well. Read more about her here.

I’m Not Going To Be Caught Dead In A Minivan!