Meat is Murdering Us as the Cows Keep On Farting 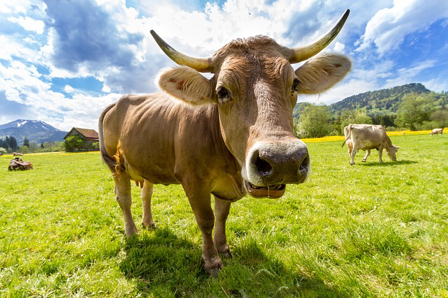 Automologist MAC wants you to know that your burger is worse for the environment than your car.

Just turn on your evening news and I almost guarantee that there will be some report or other on how we need to reduce the world’s carbon emissions by burning less fossil fuel, but the chances are the burger you ate for lunch is actually a bigger problem than the car you drove to the restaurant in.

According to a report by GRAIN and the Henrich Boll Foundation, if the world is to achieve the Paris Agreement and avoid an environmental catastrophe, then we need to seriously rethink our diets and reduce the amount of meat and dairy that we consume.

The world is of course combatting the negative impact of oil and trying to switch to electric cars powered by renewable sources of energy, but frankly I doubt that the change can be effected quickly enough, due primarily to the lack of investment in truly green power stations that will be able to cater for the massive increase in demand that electric transportation will create.

The world’s top three meat producers, though, who are JBS, Cargill and Tyson, do not seem to be in such a hurry to combat the excessive greenhouse gases, produced firstly from the nether regions of the millions of animals raised to satisfy our demand for a juicy steak or succulent pork chop or greasy fried chicken, and secondly from the slaughtering, transportation, and storage of the proto-meats.

The report calculates that just the top three meat companies generated more greenhouse gases than France and rival the emissions of known baddies such as Exxon, BP and other major oil companies. In fact, the top twenty meat and dairy manufacturers beat Europe’s dirtiest nation of Germany, and if they were a nation, would rank as 7th dirtiest in the world. 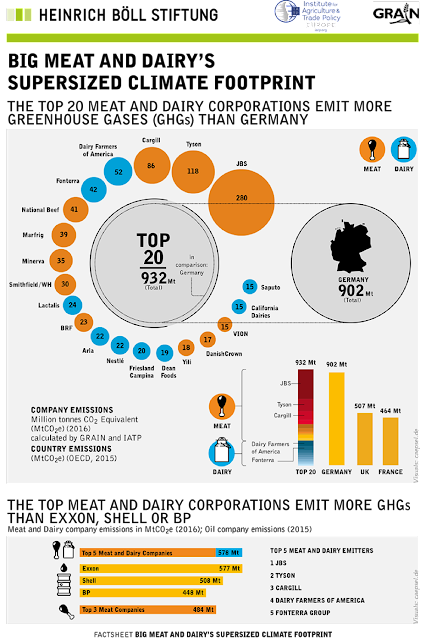 Of course, no one wants to go hungry and thus over the past few decades, the meat and dairy industries have benefitted from a number of policy issues that have supported rapid growth of this sector and to guarantee food security. As a consequence, livestock production now contributes 15% of all global greenhouse gas emissions, more than the transportation sector.

Buying an electric car, assuming you can get past the range anxiety, may not be considered a life-changing event. But for many of us, converting over to a vegetarian, dairy-free diet would be. But if we are serious about the human race and having a planet for our kids to live in, then we need to significantly rethink the way we produce and consume the meat in our diet.

Switching to locally produced meat from a local supplier or even to artificially produced meat, if it ever becomes available, would be a great way to reduce greenhouse gases. But a tax on meat probably wouldn’t work as the highest consumption rates are unsurprisingly in the monied classes in developed countries, who can probably afford to spend more.

All change starts with the individual and thus just going vegetarian one day a week would be a great start, particularly if we could convince the world to do this. Telling your friends and family about the problem, like I am doing in this blog, may convince others to cut down on meat consumption. But for now, I am guessing that most of us will still enjoy a burger with a side serving of environmental destruction.

A Most Wonderful Time of the Year: X-1R's Christmas Party

More in whysoserious
This Full-Size Bugatti Chiron is Made of LEGO and Drives! Well, at 18 mph. But Still!
September 3, 2018