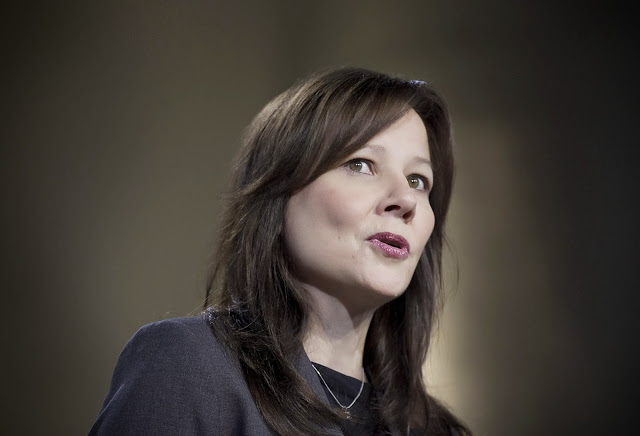 Mary, Mary, quite contrary,
How does your empire grow?
With Silverados and Corvette autos,
And 200 000 on the payroll.

Although the original nursery rhyme is supposedly about Mary, Queen of Scots, we think that it should henceforth be about Mary Barra, the newly elected CEO of General Motors. Automotive and business news headlines have been abuzz about her expedited promotion, with the current CEO, Dan Akerson, stepping down earlier than expected due to his wife’s ill health. Barra will fill the vacated shoes effective from 15 January 2014.

So why all this hype? Is it just another hollow show of support for feminism from the male-dominated business and automotive communities? The last hoo-ha that occurred when a female was appointed head of a major corporation was in July 2012 when Marissa Mayer became CEO of Yahoo!. So, what’s the big deal with another female CEO? Plenty, we think.

In the list of Fortune 500 and Fortune 501 to 1000 companies, only less than 5% of the companies are headed by a female, but quite a few of them are already from the ICT industry. Not to belittle Mayer’s achievement, for it couldn’t have been a walk in the park (more like a painful stroll through thorny rose bushes) to join that slim percentage, but Barra will be the first female to lead an automotive firm, in an industry that has been wallowing in testosterone for more than a century.
Most people, women included, think that what the fairer sex does behind the steering wheel does not even qualify as driving. So, for a female to head one of the oldest car corporations in the world is something of a miracle.

Furthermore, amongst all the companies headed by female CEOs, GM boasts the largest revenue, about USD152 billion, and ranks 7th on Fortune 500 list. Come next year, Barra will usurp the top place in this regard from Meg Whitman of Hewlett Packard, which places 15th on the Fortune list. This, we suppose, will make Barra the most powerful woman in business.

GM’s recent lineup of Chevrolet Silverado, Corvette and Impala, and Cadillac ATS and CTS has been generally well received and praised, and are said to have received Barra’s magic touch as Chief of Product Development (this explains the 3rd line of the nursery rhyme above, if you didn’t catch that).

PS: If you’re wondering about the 4th line in the rhyme, GM has about 200 000 employees globally.

More in asia
If only every Uber and Grab Driver is like THIS GUY
September 24, 2017