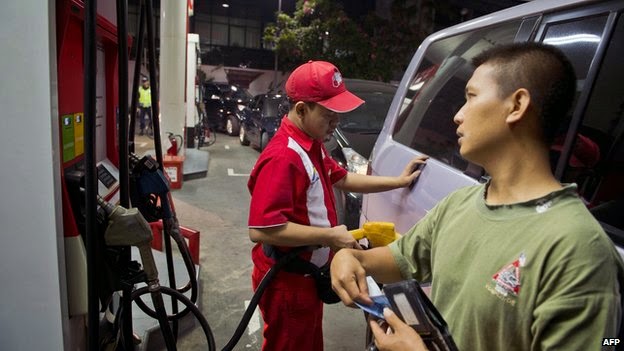 Following up on his election pledges to fix the Indonesian economy, President Joko Widodo has unveiled a hefty increase in the price of subsidised fuel for the territory, a risky step in a notoriously politically-volatile nation, in an attempt to shore up the otherwise tattered finances of South East Asia’s largest economy.

As of midnight yesterday, prices for both petrol and diesel shot up by 30% in an attempt to save the economy more than US$8 billion in fiscal 2015, with petrol set to start at about US$0.70 and diesel at about US$0.62 per litre, which will still be amongst the cheapest in the world.

The fuel subsidy bill stands at about US$23 billion per year, or about 20% of the national budget, and is seen as the main reason that there is a budget deficit; a reduction of this was firmly in Joko Widodo’s election manifesto who is looking to bolster government finances with this move.

“The country has needed a budget for infrastructure, healthcare and education but instead spent it on subsidising fuel,” he told reporters on Monday.

Economists have welcomed the fuel price increase, with Wellian Wiranto, from OCBC Bank in Singapore, saying the cash spent on subsidies “can now be used to build schools for the young and hospitals for the old, rather than being burned in engines of cars idling in traffic jams”.

The Indonesian economy has been slowing down with a growth rate of 5% in the third quarter of this year, compared to the same quarter last year, and with inflation at about 7% for the year; it is thought that the county’s central bank will have to increase interest rates to cope with the rising inflation.

The Organisation for Land Transport Owners has called for a nationwide strike but generally reactions to the hike have been mixed with many understanding the need to develop welfare, health and education sectors, but many are questioning the need to take this measure now when global oil prices are currently in decline.

Previous price hikes, like the one last year, sparked violent protests and there were some reports of students clashing with Police, but on the whole the capital was calm although there were long queues at petrol stations to fill up before the increase came into effect.

More in featured
If You Have Neglected Your Car Maintenance, It’s Not Too Late. Read This…
November 17, 2020