If it’s good enough for the Pope… 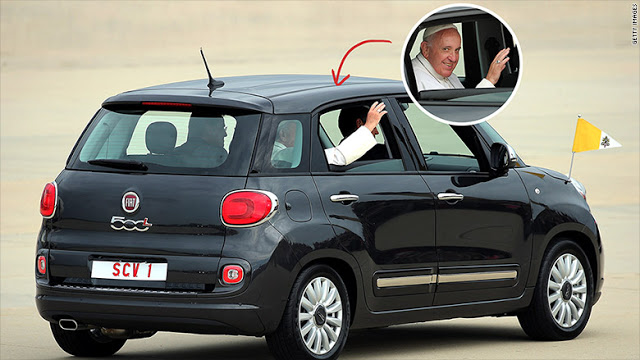 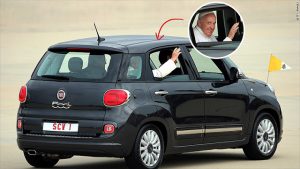 The head of the Catholic Church made his first trip to the USA last week, and during his visit spoke out about the abolishment of the death penalty, treatment of immigrants and combating poverty, but one other thing has garnered a lot of attention…the car.

The compact, bulbous shaped vehicle that whisked Pope Francis away after he landed at the Joint Base Andrews airport in Washington found itself under the spotlight as it ferried the beloved Pope from Washington to New York to Philadelphia. What humble-looking vehicle had earned the honour of being the ride of choice during the pontiff’s six-day tour?

It is the sibling of the more well-known Fiat 500 mini car – the Fiat 500L. Unlike its smaller sibling, the 500L is comparatively roomy as it has an added 3.5 inches to the rear seat legroom and four inches to the headroom, so it can fit four comfortably and accommodate five, not so comfortably. Overall, the 500L is built two feet longer and six inches taller.

Speaking to Bloomberg, Fiat Chrysler’s Brand Manager, Kathy Finn, said that they have been inundated with enquiries since the Pope’s arrival. “Customers are calling, surprised at how spacious the car is and asking about that particular model,” she revealed.

During his speech at the White House, the Pope also spoke about the urgency of environmental protection and praised Barack Obama for his efforts in reducing air pollution. However, the 2015 Fiat 500L has an EPA fuel economy rating of 27 MPG (combined), which is far from the top ranking for non-electric vehicles, claimed by none other than the Toyota Prius with a 50 MPG rating.

Still, selling for only US$20,000 (starting price), the 500L is ideal for the frugal Pope who appears to eschew all worldly luxuries. Sales for the 500L were actually quite lacklustre, falling behind the 500 and the new 500X, a crossover SUV with AWD option. In fact, from January to August of 2015, sales of the 500L fell 19% year-on-year to 6,695 units. But things could be taking a turn. According to a Kelley Blue Book’s spokesperson, the car-pricing site registered a 50% spike in searches for Fiat and the 500L, thanks to the Pope’s inadvertent advocacy.

Fiat has indeed been blessed. During parades, Pope Francis rode in a modified Jeep Wrangler – another brand under Fiat Chrysler – which had an open top so that he could easily wave at and be seen by the worshiping crowd.

Pope Francis has always opted for modest vehicles, rather than the large, unwieldy security vehicles we are used to seeing accompany visiting dignitaries. Back in Rome, he gets around in a vehicle that could not be more common and practical – the Ford Focus.

When he was still a cardinal in Argentina, he took the subway.

More in alternative
Lamborghini Asterion LPI 910-4: one V10 and a trio of electric motors
February 16, 2015