How to deal with a Teenager in the Car 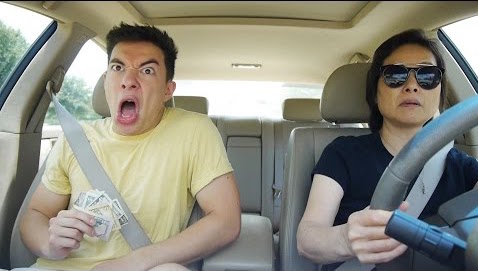 Being a parent of a teenager is hard – emotional tantrums, blasting that thing they call music, and the endless supply of energy. YouTube star Motoki Maxted’s mother showed us all how to deal with a teenager, in this latest video posted by Motoki that has since gone viral, racking up more than 3 million views in a week.

In the video, Maxted, who is in the passenger seat, puts on an aggressive lip-syncing show as his mother drives them to an unknown destination. Maxted puts his whole body (and face) into the performance as he silently belted out hits from the likes of Rihanna, Meghan Trainor, Sia, Drake and Twenty One Pilots.

But the real star of the video is Maxted’s mother, who keeps driving – stoic-faced and cool behind her sunglasses – and chewing gum, no less. Mothers would agree that sometimes the best way to deal with teenagers is exactly that – IGNORE THEM.

The best part, we think, is when Maxted unbuckles his seatbelt, gets up on his seat and twerks…his mother decides that that is unacceptable and finally reacts. Watch until the end:

Talking to ABC News, Maxted said that his mother “had to probably put up with a lot” from him. “But I’m pretty sure she genuinely just doesn’t find me funny, hence the stone-cold face,” he added.

In another video that Maxted posted earlier, he drives his mom around town and they engage in a typical conversation showing the generational gap between mother and son, and also the close bond they share.

Now, if all parents and teens got along like these two, the world would be a better place.

More in featured
Why Do Car Parks Have “Park At Your Own Risk” Signs?
December 7, 2020