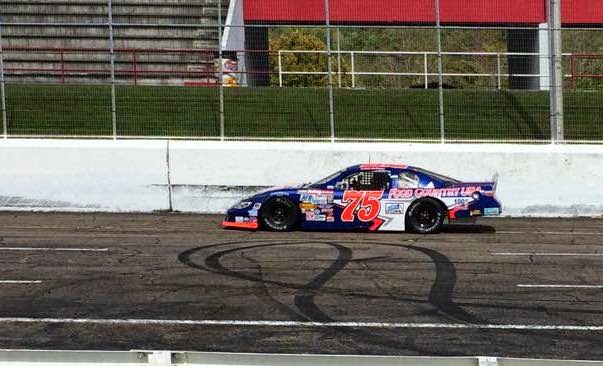 The sizeable crowd in the stands of the Lonesome Pine Raceway thought that they would be seeing young Gus Dean clinch his second career victory in the Morgan McClure Ford-Chevrolet 200 race. Dean was behind Caleb Holman for the first 100 laps, but took over the top position after the halfway break restart on lap 101; he led the field until the race was yellow-flagged when Lance Gatlin’s car broke down on lap 144, resulting in a restart on lap 150.

The restart was just what Holman needed to seal victory on his home track, reenacting his win from 2011 when the series took place at the Southwest Virginia track. Later, in Edelbrock Victory Lane, he said, “That was a pretty fun battle for the win with Gus (Dean) there at the end. He was doing all he could to put the pressure on me because we both had some pretty good race cars. Luckily for me I had just a little more grip than he did at the end…It’s pretty cool for me to win here tonight. I’m from up this way so I have a lot of friends, family, and people from my church here so it’s nice to be able to share this win with them.”

Rounding out the podium was veteran JP Morgan. Fourth place was taken by newcomer Brad Ball, while Danny O’Quinn, former NASCAR Nationwide Series Rookie of the Year, came in fifth driving a late model stock car as part of the series’ exploration of a combined racing package amongst Late Model Stock and Pro Cup cars for the future.

The next race in the X-1R Pro Cup Series, Bojangles 250, will take place on 18 October at the Hickory Motor Speedway in Hickory, North Carolina.