We thought they were gone for good, but Automologist MAC has some good news for us.

Even though my last three 911s and last two Macans have been automatic, I am still in love with the raw visceral driving experience that is a manual transmission in the Porsche Carrera aka the 911. Drifting it around corners, then dropping a gear and smoking the tyres as you pull the beast straight and power away…and sometimes fishtailing it and going arse first into the hedgerow, of course……Huh! Those were the days, destined to live only in my memory now.

But the great news is that there will be a whole new generation that will know what it is like to be towed out of the hedgerow as prospective Carrera S and Carrera 4S owners can specify a 7-speed manual gear box as just one option amongst a host of new equipment options from our old friends over in Zuffenhausen. Apparently, Porsche will happily install a seven-speed box in place of the more standard eight-speed PDK auto transmission, which is the standard offering in both the Carrera S and Carrera 4S models, both of which will still have the Porsche Sports Chrono package. This of course incorporates the automatic rev-match function that allows for smooth downshifts, which is especially useful for those times when you get it wrong. The Chrono pack also has five driving modes— Normal, Sport, Sport Plus, Wet and Individual—and there I was thinking that there were only Silly and Stupid driving modes.

Grandad, What is a Handbrake Turn?

The Chrono pack has been updated to include a tyre temperature indicator in the cabin: blue bars that gradually fade to white when the optimum tyre temperature and therefore grip has been achieved. Now, I never drive like that anymore, but I want it anyway. As with the previous manual gearbox, Porsche has very thoughtfully added the Torque Vectoring function mapped to a mechanical limited-slip differential. 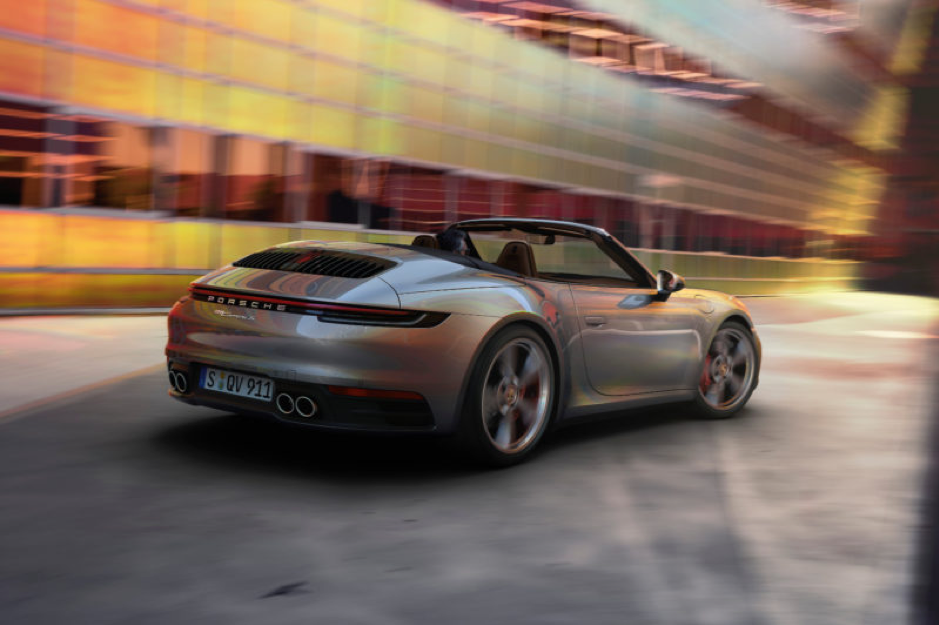 Whilst this news will be seen as fruit from the Gods for some, there is a slight downside. The manual is not as fast as the automatic. The 300+kph top speed is the same as before even though the slimmed-down gearbox shaves some 35kg off the weight of the car, but it is the acceleration that is slowed, simply because the machine can shift gears faster than the human… Basically, the same three-litre twin-turbo flat-six putting out 443bhp will take a full half-second longer to top the 100 kph mark than the auto driven one. Now, some would say it is only half a second, but that makes the car figures from 3.7 seconds to 4.2 seconds and when you are spec-ing out a supercar, that is a big difference.

The new vehicles have all sorts of creature comforts and there is also a new leather package that is supposed to be a homage to the 930 Turbo Carrera, complete with the quilted door panels and seats—not sure about that one.

There is a very good optional extra that everyone should opt for and that is Porsche’s new Smartlift. This an electrohydraulic system that increases the front ground clearance, you know, so you don’t scrape your front valance on curbs or speed humps. What is smart about this system is that it remembers where you activated the system and thereafter it will raise or lower the car automatically to avoid said obstructions and thus you will avoid those cringe-worthy grinding noises emanating from the front of your ride.