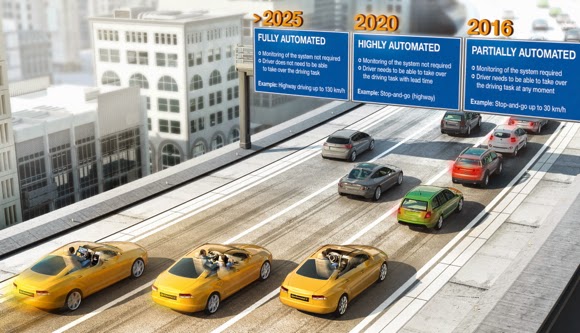 Is the Google Pod the end of personal car ownership? Automology’s writer, MAC, thinks so.

Perhaps our headline is a bit premature but with the advent of technology from Google, it may not be that far away. Just last week, Google announced the launch of the new Google car or Google Pod, as the pod-like vehicle is now becoming known. The cutesy little two-seat vehicle has no steering wheel or pedals, just a start-stop button and a computer screen on which to enter your destination and presumably surf on the Google search engine.

Although Google is not, of course, the first name you think of when you go to buy a car, but they may well be in the future. In effect, this new driverless car technology is a wake-up call to anyone who still believes in human superiority over machines. These innocuous little cartoon-inspired vehicles are set to radically alter how we go about our lives and enter us into a whole brave new world of mobilisation. Initially, all of the driverless cars that were let loose on public highways were regular Toyota and Lexus saloons; for the most part, with about US$250,000 worth of computers and sensors, and other whirly and dangly bits, lasers and associated kit. But essentially, they were still cars in the sense of the word that we all presently recognise – they had brake pedals and steering wheels, and all the paraphernalia available for the human on board to take over should the system fail. In effect, they were cars with autopilot features.

During the testing phase with the cars that allowed driver or passenger intervention, only one accident, a very minor one, occurred and that was when the human was in control; don’t forget there has been some 500,000 miles of road test. Most believe that is a pretty impressive safety record, the implications of which have not been lost on the NHTSA, insurance companies or Google themself. As we wrote last week, Google has now rolled out their Tellytubbies-inspired version of the truly autonomous vehicle, which the human inside only gets to control the vehicle about as far as start and stop, and where the destination should be.

Here is where we come to the next obvious evolution of this technology. Engineers are truly obsessive creatures who become upset with the irrationality of life in general – they tend to like order within their lives. You don’t have to be an engineer to marvel at how humanity has allowed such an inefficient mode of transport to dominate our lives. Many of us spend a fortune to purchase, operate and maintain a vehicle that is, more often than not, operated by a single person who spends a lot of the time immobile in traffic jams and spends much of the remaining time parked on a street. An industry figure that has been widely circulated is that the average vehicle spends less than 13% of its life actually being driven. The very same immobile vehicles see governments driven to the verge of bankruptcy trying to provide the infrastructure to support mobility habits as well as the death of the environment with their polluting ways.

Google engineers are already suggesting that we need to stop thinking of cars as possessions and reclassify them as service providers. Let’s face it – we own cars because taxis are expensive and hard to find at the time that you really have to have one; buses are unreliable and inflexible, but your car is there whenever you so desire. But what if we decided to adopt the A-MoD model we have previously written about? What if we were to flood an area or a city with the Google Pods, capable of being summoned with your smartphone that can detect the one nearest to you? What if we could easily walk out onto the street, have a Google Pod pick us up and safely deliver us to our destination at so very much cheaper than an old gas-guzzling human-driven version?

If you think that this engineering solution to rationalise urban transportation isn’t possible, you may be a Luddite. Google has demonstrated the car but did you also know that Google has a share in the company called Uber, the company that allows you to hail the nearest taxi with your smartphone? Sure, these cars still have drivers but perhaps it is not a giant leap to the time that they do not.

Police Gets The New Lamborghini Huracán

15 General Motors Employees Get The Boot