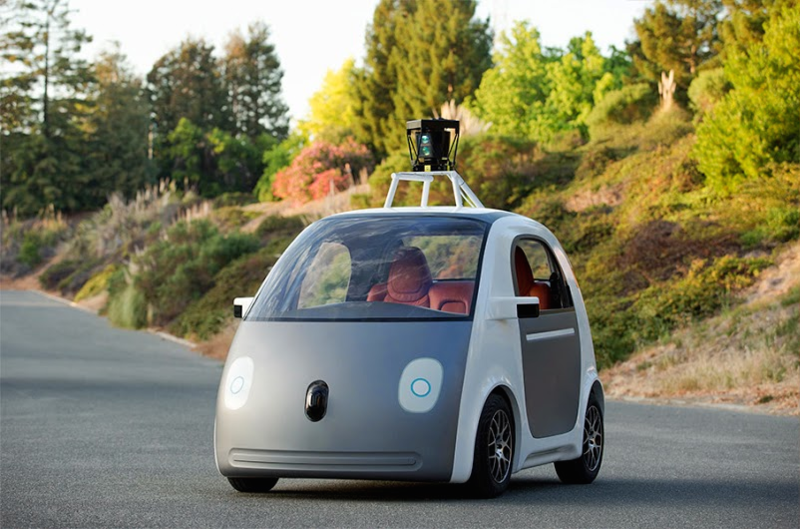 Don’t be fooled by the smiley face on the car pictured above even if the vehicle looks like something you would see on the kids show Teletubbies. This could sound the death knell for motoring as we know it and usher in the Brave New World that science fiction novelists have been telling us will come someday.

Many driving purists will question whether this is really a car as it will not have steering wheel, accelerator nor brake pedal, but just a simple stop-go button and a computer screen to show you your route. With Google software and sensors doing the rest for you, it may well prove to be about as interesting as riding in an elevator.

The computerised brain of the car is programmed with road rules and guides the car to any chosen destination selected by the driver. It combines technology that mainstream car manufacturers – including Volvo, Nissan, Mercedes-Benz and Honda – have been working on and which already exists in modern cars, such as autonomous braking, adaptive cruise control and lane recognition.

Chris Urmson, head of the Google Self-driving Car project, says that they want to build about 100 of the futuristic two-seater electric-powered vehicles this year for a large scale real world road test, assuming that they can satisfy local traffic laws, which are proving to be the biggest obstacle. It is believed though that by the end of this year, California’s Department of Motor Vehicles plans to implement regulations for the use of driverless cars. Four US states – Nevada, Florida, California, and Michigan – have passed laws permitting autonomous cars.

We assume that some special adaptation of the vehicle is being used during the testing phase conducted in Mountain View, California where local residents have been complaining that the cars are ruining their morning commute. To date, the cars testing the technology have been standard cars converted to using the autonomous technology, with a driver standing at the ready to take control if required.

The next phase will be the construction of the fully bespoke autonomous vehicle as shown in the picture above. ‘It was a big decision for us to go and start building our vehicles,’ said Urmson ‘Really, they’re prototype vehicles. They were a chance for us to explore, “What does it really mean to have a self-driving vehicle?” But in the small amount of time that we’ve been working on it we have functional prototypes.’

Road safety is foremost in the minds of the developers and the vehicle has been restricted to a top speed of 25mph, has a foam-filled front end and a soft plexi-glass windscreen. Urmson stated that the cars will revolutionise driving and help to remove the ‘human-error’ blamed for 90% of crashes.

Google Car Safety Director, Ron Medford, former Deputy Director of the US National Highway Traffic Safety Administration, said road deaths could be drastically reduced by removing human driver error. ‘It has the potential to be the most important safety technology the auto industry has ever seen,’ he said.

Will Rockall, Director at KPMG’s cyber security team, said, ‘Self-drive cars will probably work through internet connectivity and, just as large volumes of electronic traffic can be routed to overwhelm websites, the opportunity for self-drive traffic being routed to create “spam jams” or disruption is a very real prospect. So having your journey to work hacked by some spotty could become a real world scenario.’

The car is not perfect and there have been some glitches in the development of it, but over the past year, Google has made some major advancements to the package. Amongst their improvements, they have managed to stop their vehicles from killing cyclists by improving the laser imaging. The vehicles have also been programmed to break the law; for instance, when there is a need to keep up with traffic, the vehicle will exceed the speed limit.

The developers still have a few scenarios that the car cannot cope with. For instance, bad weather changes the way that the sensors see the world. So, in situations where there is snow on the ground, water splashing up or fog, the vehicle will not function correctly yet. Identifying and understanding traffic cops is also a bit challenging – the car can see that there is someone on the road waving their arms about, but it cannot decide what to do, which may mean you end up parking on the cop, which of course spoils your day.

Talking of spoiling your day, the sensors are good enough to pick up large animals like human and deer, but Urmson admits that smaller animals, such as squirrels, which may bolt across the road are still too small for its sensors. So if you are fed up of squirrels nibbling your nuts, this may well be the car for you.