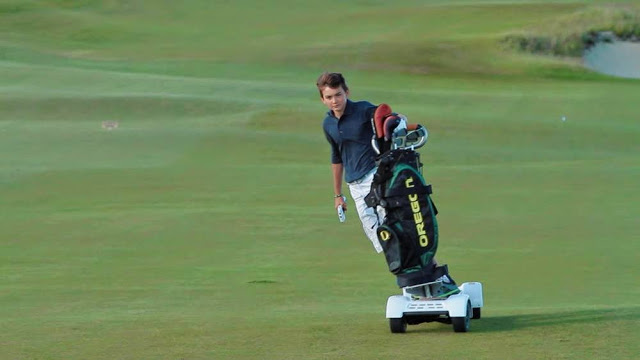 The sport that dates back to the 15th century is being given a modern twist. Automologist, MAC, brings to our attention a new invention intended to inject new life into the game…but will it?

According to the makers of GolfBoard, the venerable game of Golf is in the rough. With each passing generation, there are fewer and fewer people taking the sport up and it is struggling to reach the new generation who seem to view the sport as expensive, slow, time-consuming and altogether rather dull. Meanwhile, board sports continue to draw more and more youths year after year. It should be no surprise then that someone has had the bright idea of combining the game of Kings with the modern penchant for board sports – Ladies and Gentlemen, we give you the GOLFBOARD.

According to the company’s website, it may be electric but it’s a total gas! Fast it is not, with a top speed of 16kph for rental versions and about 20kph for privately-owned versions. Apparently it is as responsive as a snow board would be and thanks to the spring plates fore and aft, the cushioned ride will keep the wheels on the ground. Capable of handling terrain that a conventional golf buggy could not, the GolfBoard is rated to being able to cover 36 holes on one charge, although I’m sure that it depends on the terrain and just how straight your golf game is.

“We expected it to attract surfers and more athletic golfers, but it’s spread to every generation,” says Rodney Reifsnider, general manager of Dubsdread Golf Course in Orlando, Florida.

However, at US$6500 apiece, younger golfers who are still capable of walking a round of golf probably will not involve themselves with the new technology and older golfers like me, well, I enjoy a sit on the buggy when I am going around.