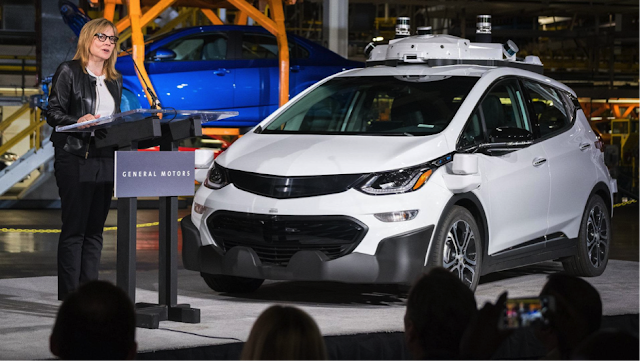 In April of this year, the last living person from the 1800’s died. In her 117 years on this earth, she had watched the world change in some unbelievable ways and it made me wonder about the changes the oldest person from my generation would witness.

If you believe Mary Barra of General Motors, then one of the key changes that even I should live long enough to witness is the advent of autonomous cars. GM has officially announced that it has finished making the first 130 self-driving Chevrolet Bolt test vehicles, an achievement that GM hopes will put it at the forefront of auto-manufacturing for the next 100 years.

At this point, some of you may be thinking “so what?”. There are others out there already, so what is so newsworthy about this announcement? Well, these Chevy Bolts are not some retro-fitted hodge-podge of parts; these are the first that are capable of being mass-produced on an assembly line in large numbers, and that is something no one else is capable of doing just yet.

Read also: What is going on at General Motors?

This is the second generation of autonomous Chevy Bolts and is said to be capable of handling just about any road situation without the intervention of a driver, although for now the vehicles still need a real person behind the wheel, who is capable of taking over in the event of an emergency.

This batch of 130 will join the previous 50 retro-fitted Bolts that are trialling the technology in Arizona, California and Michigan, with the aim of learning more about the technology. GM has invested heavily into the new technology, with acquisitions of companies in Silicon Valley and of course its involvement with Lyft, an Uber competitor, in which GM has already invested half a billion dollars.

Much of the new technology is about reducing our carbon footprint, and if it achieves that, then it has to be a good thing. In my mind, though, the advance of Google Maps and Waze has probably reduced fuel consumption more than any other technological advances in the past ten years. But I am sort of hoping that the autonomous cars of the future have an “I am feeling lucky” button or a scenic mode so my kids will enjoy getting lost or just enjoying the view as they go about their daily business.

I am pretty sure that the millennials are the generation that decides whether mankind’s future is Star Trek, or Wall-E or even Mad Max. Safety is another key concern, and I of course would tell you that by making everything super safe, we are dumbing down society by not allowing stupid people to eradicate themselves from the gene-pool in a Darwinian-style survival of the fittest, or in this case, the brightest. But of course being safe is also good; not so sure about being dumb though.

Now that is a proper Bolt!

My Ride-Hailing Driver is a Better Person than I am

Here is the Skinny on the Bugatti Chiron

More in whysoserious
Why Women Are Better Drivers Than You Think
July 17, 2017