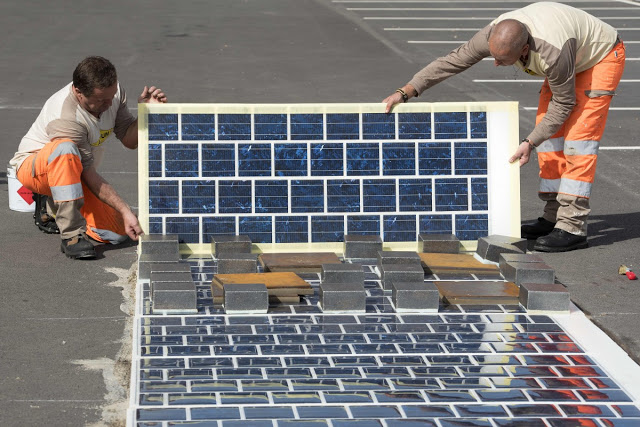 The climate change agreement brokered by the United Nations in December 2015 was historic – 195 nations pledged to reduce global warming to below 2°C by the end of the century (at least 3.6°C of warming is expected if we carry on with our wicked polluting ways). Although the targets set were not legally binding, France is already demonstrating that it means to do its part and has announced that it will pave 1,000-kilometre of road with photovoltaic panels – that’s solar panels, to the layman – by 2020. Such a long stretch of solar panels should be enough to harvest enough energy for 5 million people or 8% of the French population, according to one estimate.

It is not the first time that solar panels have been installed on public roads and bicycle paths, but none has ever been done to this extent. These are not any ol’ solar panels – the patented design, called Wattway, is constructed from a think film of polycrystalline silicon, coated with resin for durability; imperative, since all manner of vehicles – in all shapes, sizes and weight – will be driving over it. Tests have shown that a million tyre trucks passing over it left not even a scratch (give us some of that for our car porch please!). The panel also has to provide enough traction, so that vehicles will not skid across them (yikes! )

The 7-millimetre thick panels have to be “glued” onto the surface of the road, which is great, because no work needs to be done on the existing infrastructure. That being said, 1,000 kilometres is a lot of road to get through and the panels have to be installed by hand, one by one.

If laid on public roads, the panel is expected to last for about 10 years, which is the same as conventional pavement anyways, while in lighter trafficked areas, such as parking spaces, it should last for up to 20 years. The energy conversion rate of Wattway is slightly lower, though, with only 15% yield compared to industry standards of 18-19%. Nonetheless, just 4.5 metres of these solar cells can supply enough electricity to a single household, excluding heating.

We don’t know yet how much this project will cost, but the French minister of Ecology and Energy has said that raising petrol taxes would raise up to €300 million, which will pay for improvements to infrastructure, including converting roads into gigantic solar energy harvesters. Sure, that’s a lot of money, but the European Union, along with China and the United States, contribute to 45% of the world’s total GHG emissions.

Another notable development is underway in Morocco, where a cutting edge solar power plant is entering its final stages of construction. By 2017, it will provide power around the clock to an entire region, using stored sun energy.

The Sport of the Future has arrived