Flying Cars? Where is the Future We Were Promised? 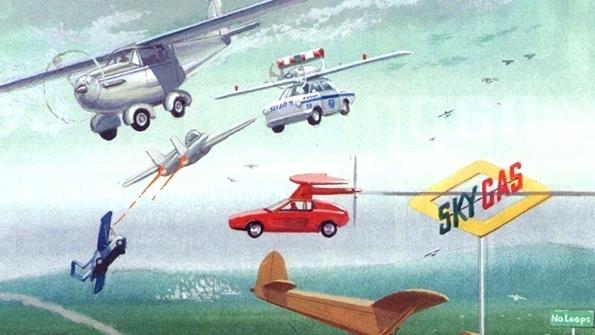 Why the hold-up? Automologist MAC has an idea or two.

For years, flying cars have been proffered as the future of personal transportation. Ever since 1924, science journals started to predict that they were a mere twenty years away. We have had some near misses with the technology and the first flying car took flight as long ago as 1960. But really, that was not really a car but more of a plane with foldable wings, which still needed a runway to get airborne.

If you live in Malaysia, you could be forgiven for thinking that the future is just about upon us, with the announcement that the next national car may well be an airborne one. The news was met with some national pride (and so it should have been) but also a very large amount of derision. Of course, when you look at the mock-up of it, you have to ask if it really could be called a car if it has no wheels.

The point of a flying car is convenience—to effortlessly soar above the land-locked traffic instead of sitting in it. The trouble is, most of the offerings have been a compromise between plane and car: not very good on the road and seriously poor when it comes to flight.

Recently, there has been a number of offerings that are more or less a scaled up helicopter drone, like the Malaysian one; so, more of a personal helicopter then than a true flying car, really. Most have decided that wheels are no longer relevant and thus few are the road-ready-rovers that we all seem to want. Of course, Terrafugia is already manufacturing the Transition, which is a two-seater airplane with folding wings that can fly some four hundred miles. Oh, but you need a runway to take off and land on, so unless you commute from an airport to an airport, it would seem that the Transition is more a rich man’s toy than a meaningful future transportation solution.

Even Aston Martin thinks Flying Cars are the future.

We can totally see James Bond in this.

So, what is the hold-up? Well, to start with, red-tape is keeping some of the developments from happening. In the US of A, the flying car has to clear two organisations, the National Highway and Traffic Safety Administration (NHTSA) and the Federal Aviation Administration (FAA), and only the Terrafugia is going through this process right now.

The main problem is the propulsion systems. The common thinking is that flying cars need to be electrically powered. This will allow them to operated in urban areas without breaking local noise regulations. However, even today’s best batteries, such as Lithium Phosphate, have just 2% of the energy density that most hydrocarbon-based fuels have. Adding more batteries increases the weight of the craft to a point that it just will not fly.

I doubt if we will ever see flying cars the likes of which were envisioned in the Jetsons. But I do think that helicopter drones capable of carrying a few passengers will be with us sometime real soon. I would buy one just for the fun of it. So, Malaysia and all the others following this path may well have the last laugh yet.

Hyundai and Kia's Reputation Goes Up in Smoke

More in featured
What to Avoid and What to Drink When Riding
March 4, 2020