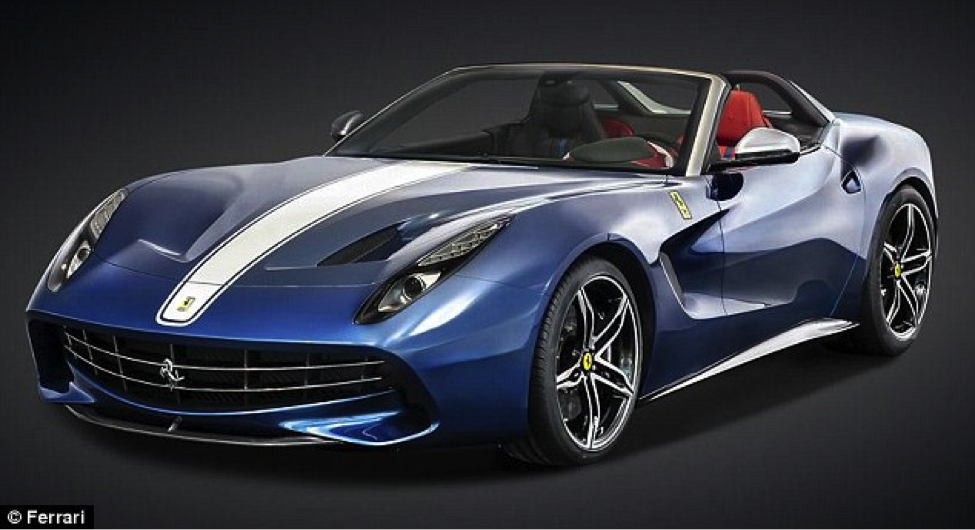 Celebrating 60 years of selling cars in the US of A, Ferrari has unveiled their homage to the achievement in the form of the F60 America. Looking stunning in blue with an asymmetric red/black leather interior, it is packed with the same V12 engine that you can find in the F12 Berlinetta which produces a whopping 729bhp at 8500 rpm, an output that will be capable of powering the beast from 0-100km in about 3.1 seconds. The car is said to combine the two great passions of Ferrari’s American customers, those being a V12 engine and opened-top motoring.

The car does come with a light fabric roof, but with it closed, the vehicle’s top speed is limited to 120kph (75mph) and thus the top needs to be open if you want to push the car towards its top speed. The convertible boasts leather-trimmed rollover hoops, which are backed by carbon fibre trimmed flying buttresses that flow into the tail of the car. A Ferrari North America company spokesman said, “The F60 America’s personality is instantly clear from its flanks, which are characterised by an innovative diapason design theme. The front of the car is dominated by the classic Ferrari single front grille with chrome finish and integrated air intakes for the brakes.”

If you are thinking that this is the perfect car for you, we will let you know that the list price is a mere snip at US$1.5 million and if you are still interested, then you will also need to know that there will only ever be ten of them built and they have already been sold to American investors.

VW, Mercedes and BMW sign up longer deals in China

Say “Ciao Bella” to the first all-electric supercar from Italy

More in featured
Grandad, What is a Handbrake Turn?
November 20, 2019