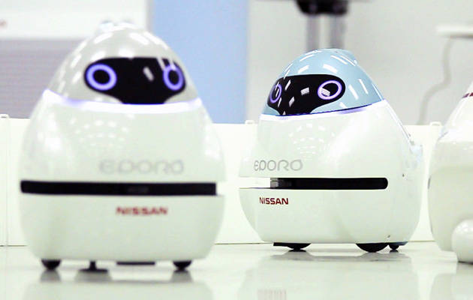 Flocks of birds and schools of fish are able to intuitively move in sync, without knocking into each other. The experts at Nissan Motor Company believe that these animals’ are the key to preventing road collisions in the future.

Toru Futami, the Engineering Director of Advanced Technology and Research, believes that studying these animals’ movements when in groups will assist automotive engineers in improving inter-vehicle interaction and elevate road safety. The ultimate end is to eliminate serious injuries and road fatalities.

These underwater creatures get along swimmingly by following 3 rules: don’t stray too far, don’t get to close, don’t touch each other. Despite the lack of predetermined route, fish swim very closely to each other. If this behaviour can be mimicked by vehicles, then more vehicles can occupy the same roads but with less congestions and accidents.

The study by Nissan has so far given birth to 7 Eporo (Episode 0 Robot). Their Laser Range Finder technology is inspired by the bumblebee’s compound eyes, which has the capability of more than 300 degrees vision. The Eporos can move together in a line or side-by-side by monitoring each other’s positions. The implementation of this technology to modern-day vehicles would put an end to vehicle lanes and traffic signals.