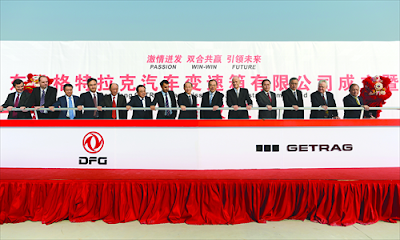 In an announcement this week, Dongfeng, China’s second largest auto manufacturer, has announced the creation of a JV with Germany’s Getrag Group, the world’s largest independent manufacturer of transmissions. Based in the central Chinese city of Wuhan, the JV is a 50:50 arrangement between the 2 companies and will involve an investment of USD165 million to set up for the first phase alone.

Getrag was founded back in 1935 in Ludwigsburg, Germany, and is currently thought to be the world’s largest independent transmission manufacturer for passenger and light commercial vehicles. Sales for the past year are thought to be about USD3.5 million, and they supply to BMW, Daimler, Ferrari, Porsche, Renault and the Volkswagen Group. They have an existing JV with Ford in the USA. The tie-up with Dongfeng will see the German manufacturer getting access into a market of potentially 3.3 million vehicles annually, a figure that may increase by over 1 million units if the central China automaker achieves their ambitious growth plans.

Dongfeng is no stranger to alliances with other automakers. They already have established relationships with Nissan, Honda, PSA Peugeot and Citroen. Earlier this month, they announced yet another acquisition, this time of the Swedish T Engineering Company, which was formerly a part of the now defunct Saab Group. This company works on R&D for control systems used in engines, transmissions and chassis, as well as research into hybrid and electric cars.