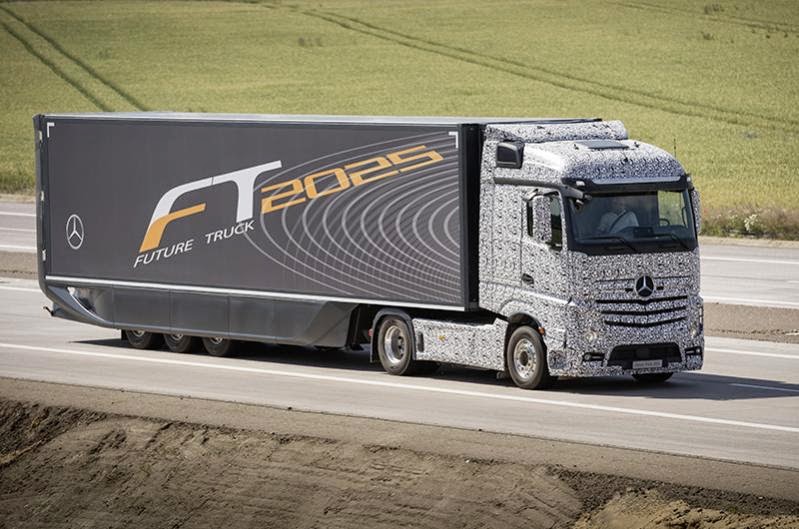 In scenes reminiscent of a Hollywood blockbuster starring the likes of Will Smith, Mercedes-Benz has been showcasing their version of the future of road transportation with the Mercedes-Benz Future Truck, which they believe will be on sale and on the roads of Europe in less than ten years’ time.

Dispensing with the driver of a vehicle is not a new concept and it is seen as a way to reduce the number of accidents on the road, and increase fuel economy and cut C02 emissions; most European countries are already studying legislation that will allow for self-guiding vehicles to ply the roads sometime soon.

Looking sleek and futuristic, the Future Truck 2025 will still be a fully functioning truck with steering wheel and pedals, unlike Google’s vision of automated driving. Wolfgang Bernhard, head of Daimler Trucks and Buses division, said in a recent interview, “The truck is our vision of what transportation might look like ten years from now; with this truck we’re showing not only passenger cars but also trucks can do that.”

The prototype’s cabin unveiled this week has been equipped with a removable tablet for executing functions on the fly, and a driver’s seat that rotates 45 degrees to enable the ‘operator’ to stretch out. The wooden flooring and leather-based trim is a lot more upscale and a lot less industrial than a standard semi’s interior, rather like an S-class sedan’s instead.

If the video doesn’t load, go to https://www.youtube.com/watch?v=5u5WXd-kaSs

The exterior of the truck has also been optimised for aerodynamic performance, giving it an upcoming-era design, perfect for the automobile exhibit circuit.

For those of you who are already nervous of the Heavy Goods Vehicles thundering along the highways, this new driverless version may be a bit too much altogether; but of course if the advancement of autonomous driving technology continues at the current pace, you will always have the option of reprogramming your personal Google Pod’s route onto some quiet, leafy lanes where you will be able to relax and perhaps even have a quiet snooze as you are whisked to your destination by the machine.

DMC Brings Out The Dark Side Of The Aventador