Could this be a Tesla Bike? 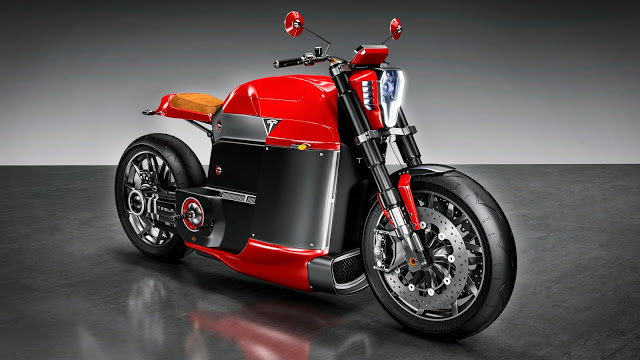 This sweet superbike is how London-based graphic designer, Jans Slapins, imagines a Tesla two-wheeler would be. It’s not the first time that Slapins has teased us with stunning, albeit fictional, machines that were created by his adept Photoshop skills. Last year, he posted the BMW Urban Racer concept (below) on his website, which also left us wishing that fantasy was fact.

So, yes, it’s not real and there is no inkling that Tesla will add an electric bike to its product line-up, but since this is made-up, we can also make up specs that would be found in our dream machine. That being said, Slapins did say that he created the design with real-world feasibility in mind. He’s even named it Model M (M for Motorbike?). Is this an elaborate job application for Tesla, you think?

The aluminium frame would accommodate a huge battery, mounted as low as possible to keep the centre of gravity low, that would power the motor on the rear wheel. Slapin says that the bike would carry a 150kWh battery pack, but considering that the Tesla Model S only has a 70kWh battery pack, this might be a tad beyond likely at the moment.

In his mind, the bike is 230kg, and has four modes – Race, Cruise, Standard and Eco. Cummon, Tesla would be able to do better than that. It already has a new Ludicrous mode for the P85D, so maybe there should be a ‘Are you out of your *bleep*ing mind!’ mode for this superbike. In the place of the fuel tank, there is instead a compartment that is big enough for the helmet, a laptop and a mobile phone. We’re not sure whether there really is enough space, or the compartment would be enchanted like Mary Poppin’s bottomless carpet bag.

Sadly, Mr Musk has said publicly that it was unlikely that Tesla would produce an electric bike in the future. He’s got dreams of cars, trains and rockets, so the bike might be just too modest for him.

Could this be a Tesla Bike?

More in autotips
Volcanic Ashfall Damages Millions of Cars in the Philippines: How To Protect Your Car
January 30, 2020