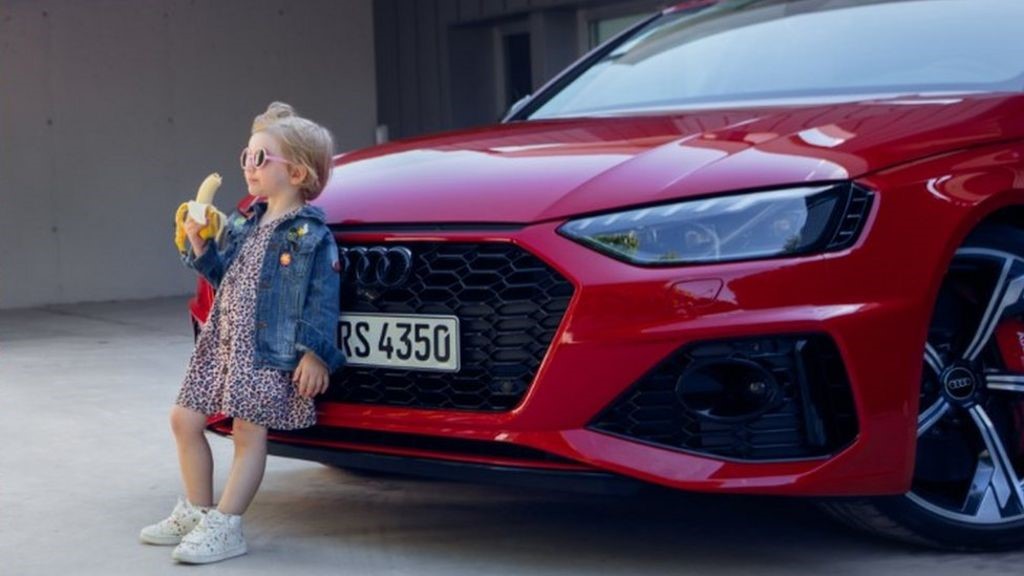 Read our earlier coverage of this issue in Malay.

Automologist LING observes the conversation surrounding the controversy with curiosity.

Immediately after Audi posted their ad for the new RS4, it was picked apart for everything from child endangerment to sexism to being sexually suggestive with a child. The German carmaker, who posted the ad on Twitter last Sunday, quickly pulled the ad down but it continues making headlines and rounds on Twitter for the major advertising boo boo.

The image of the ad shows a little girl leaning against the front of a red RS4…eating a banana. Even before seeing the image, you can guess how it can be misconstrued in so many ways.

The continuing tirade by netizens chastises Audi for not realising that bananas are phallic objects, red represents lust, animal print equals seduction, and the accompanying caption – “Lets your heart beat faster – in every aspect” – sounds predatory. Others point out that it depicts a dangerous situation: a small child in front of the car, yet that is exactly the problem that Audi wanted to address.

Many children are injured or killed in backover incidents, whereby a vehicle exiting a driveway, often at their own home, runs over a child because they could not be seen by the driver. The RS4 has over thirty driver assistance features, and Audi wanted to demonstrate that even if the kid was distracted and standing in front of your car, out of your view and unbeknownst to you, she’d still be safe. But that wasn’t how people viewing the image on screens took it.

Along with the retraction, Audi issued an apology and explanation: “We hear you and let’s get this straight: We care for children.” Hmm, that last part, out of context, can still sound so very wrong. It’s tough to find the right words with the PC culture we live in today.

So, was Audi just insensitive to issues affecting children and, in particular, girls that it managed to get itself into this pickle or do people on Twitter take offense too easily? The rise of social media has created a comment culture – one in which people “speak” on impulse and weigh in on issues without understanding it completely. It has caused the public to become enraged more quickly and easily from an image or headline than they would have if the same issue was presented to them in person. And those who might not have thought twice about the controversial image saw it in a different light after reading the negative comments, snowballing the issue.

This story from last year, though, was really unnecessary:

Sexy Safety Campaign to Get Cyclists to Wear Helmets.

Clothes optional but helmets a must.

If one had continued following Audi’s campaign, they would see the same girl with her very hip parents. Audi had meant to position the RS4 as a fun (and fast) family car for the modern family. Seen in context, the first image might not appear so provocative anymore.

Traditionally, car companies have used sex to sell, but though the automotive industry may have moved away from that approach, maybe it was a matter of too much, too soon. Perhaps one day we can safely eat a banana and it will be seen as just that – eating a banana – and nothing more.

More in featured
Ferdinand Piech, the Man from Porsche who Transformed the VW, Dies at 82
August 29, 2019