At last, a Tesla I can afford (perhaps) 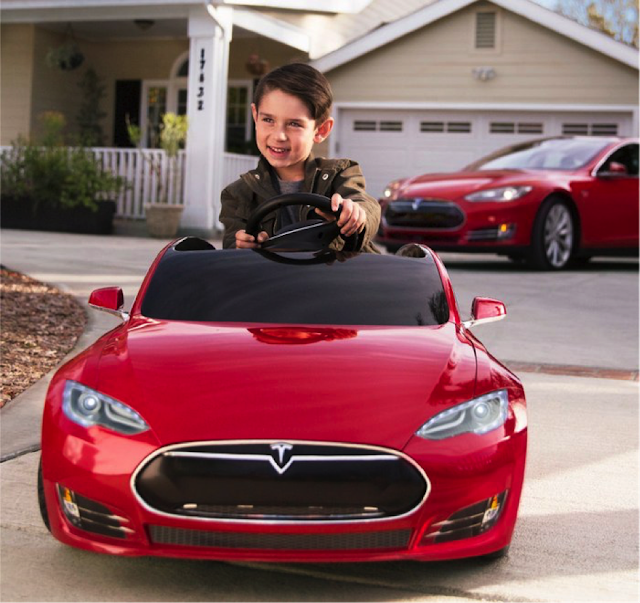 When I was a kid, big-wheeled bikes and go-karts made from soap boxes made you the cool kid on the block. Nowadays, motorised skateboards and Fat Bikes are the name of the game if you want to be numero uno of cool. But hold on, now comes something way cooler, as Radio Flyer and Tesla have teamed up to release something that brings neighbourhood one-upmanship to a whole new level – well, at least for the 3 to 8-year-old gang.

The pint-sized Model S is a feature-laden and fully customisable Model S for kids that replicates the full-sized one on a down-scaled size. Just like a real-life Model S, the diminutive version can be specified in various hues and performance options. With working headlights, a front boot, forward and reverse controls and even a sound system that hooks up with a smartphone, Radio Flyer claims that its version is as close to the real Model S as you can get.

A FlightSpeed lithium-ion battery powers this scaled-down Model S, offering long run-time and fast charging (no battery stats are available yet). At least the little ones won’t have range anxiety behind this wheel. The kids’ Model S takes three hours to get a full charge, and the batteries can be swapped out faster than Tesla’s battery swap stations (which are as good as dead, even before taking off). Radio Flyer pointed out that other kids’ vehicles use lead-acid batteries, which take an entire day for a full charge. The kids’ car has two speed settings – there’s a beginner’s speed cap of 3 mph, while the second setting goes up to 6 mph.

According to the Radio Flyer website, the cost starts at a mere US$499. For this price, kids will get the full Tesla ownership experience, as the Model S for Kids even comes with a Tesla car cover. Orders are being accepted now with deliveries expected to start in May. Want one? Take a look.

Extreme Performance despite Extreme Weather, Thanks to X-1R

More in asia
Honda Ceases Production in the Philippines
February 26, 2020