And The Wheels On The Bus Go Round and Round 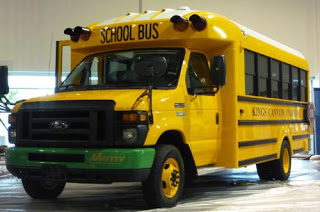 Is this the most obvious application for green technology that no one has thought of before now? The humble school bus for American streets. The all-electric Type A school bus, which the manufacturer claims to be the first of its kind, is set to hit the roads in the coming year. Built and developed by Motiv Power Systems and Trans Tech Bus, it will be put into service in Kings Canyon Unified School District in central California.

The bus was revealed in Grand Rapids, Michigan, at the 2013 National Association for Pupil Transportation Annual Summit (yes, a convention for school bus drivers does actually exist). It is designed to carry a total of 32 students at a time with a range of 80 to 100 miles, and is designed to replace the old diesel powered, toxic exhaust emitting vehicles. With the fast charge technology, it can achieve 50% charge in about an hour and full charge in about 8 hours.

The bus doesn’t come cheap though. It costs around USD175,000 whilst the conventional Type A school bus only cost an average of USD80,000. However, it is claimed that the electric bus can save the school district thousands per year in fuel and maintenance costs. “An electric bus can save a school district about 16 gallons of fuel a day, or around USD11,000 in fuel savings over a year, not to mention maintenance savings,” said John Phraner, President of Trans Tech “We are very excited to continue to help school districts reduce their transportation budgets and are committed to opening the market for the all-electric school bus.”

One of the key features of the bus is the interchangeable battery configuration, which means that regardless of future trends and developments, the new all-electric bus can continue in service. In fact, Jim Castelaz, Founder and CEO of Motiv, claims, “Our system is battery agnostic, it ‘future-proofs’ fleets against changes in the battery market, such as discontinued batteries or future improved technology. This makes a Motiv equipped bus the most flexible and customisable all-electric powertrain for trucks on the market. We are thrilled the ePCS (electric Powertrain Control System) will be assisting schools get the most out of their transportation dollars, while at the same time educating children on clean transportation.”

And The Wheels On The Bus Go Round and Round