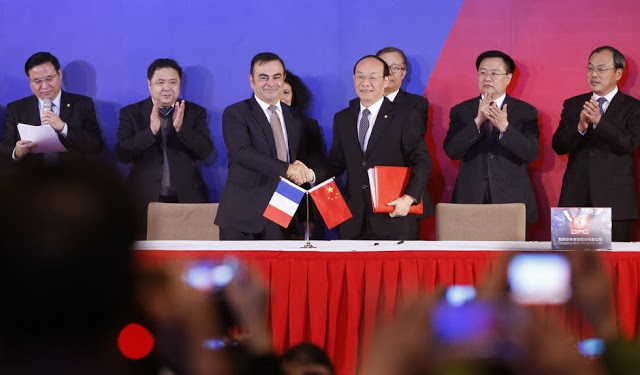 The latest news is that one of the top 10 global car manufacturers yet to have a production plant in China is finally making its entrance. The better-late-than-never carmaker is…Renault.

The 50-50 joint venture between China’s Dongfeng and the French car manufacturer has a value of USD1.3 billion and will materialise a plant in Wuhan. With the agreement signed, Renault is writing the first page of its history in China.

Hold on a minute – is that true? Is this their first attempt to enter into manufacturing in China? The fact is, Renault has been working with China Space Sanjiang Group (CSSP) from 1993 to 2003 to produce automobiles and commercial vehicles in China. However, production ceased before Renault started getting chummy with Dongfeng. Sorry to disclose this piece of information here, but the business with CSSP was a complete and ignominious failure. There were not enough orders from Renault; the 10 000 units in 10 years were just not moving the plant forward, especially in such a behemoth country like China.

What makes Renault confident that this upcoming venture will be any different? Well, the obvious reason is that CSSP is from the SPACE industry while Dongfeng is one of the top 5 CAR manufacturers in China. My own personal observation on another major differentiation is that this time there is a love triangle, in a good way. Dongfeng has had a successful partnership with Nissan that spans 10 years, and Renault and Nissan are strategic allies.

In the 1990s, a significant number of large-scale alliances took place in the automotive industry, set against a backdrop of intense global competition. Instead of turning against each other in the innovation race, occurring in a resource-scarce environment, automakers chose to turn to each other, shake hands and leverage on each other’s competitive advantages. The world’s automotive stage had moved to emerging markets, with the conventional markets of Japan, Europe and US reaching maturity.

Some of the mains reasons automotive makers chose to build alliances are:

Renault and Nissan entered into their alliance from as far back as 1999, with the intention for capacity building and mutual learning. Nissan was down in financial and market share in those days, due to weak strategic planning, but the firm was very successful in manufacturing productivity. Nissan had optimised product development lead time besides its enviable engine technology and key components. However, Nissan had failed to produce attractive products.

At the same time, Renault achieved flying colours in its financial performance, but was found lacking in productivity. The company was already experienced with surviving economic slumps during the eighties, was adept at financial restructuring, cost reduction and product management, and had adopted operational best practices. ‘Japanisation’ of Renault’s quality management was one of the pillars that supported the company through the economy crisis.

The strategic alliance between Nissan and Renault therefore complemented each other fantastically, like finding the missing puzzles in each other and fitting the pieces together with ease. Renault transferred their COO, Carlos Ghosn, to become the revivalist of Renault-Nissan, despite having very limited control, with only 36.8% equity stake in Nissan.

Renault-Nissan had gone through the furnace of fire, emerging with their competitive advantages sharpened. The same COO, Carlos Ghosn, is going to lead the new partnership of Renault-Nissan-Dongfeng, and I predict as much success in this business venture as the earlier one. We can see the advantages in this partnership; however, there are many underlying issues that will determine the eventual outcome of the partnership, such as control, values, culture, expectations and many others. We will have to wait for the future to reveal it to us.

Camry Is Back In The Game!

More in whysoserious
A motorcycle that runs on water?
August 7, 2015